The Skink is a very diverse type of Lizard species with a huge number of sub species. There are more than 1,200 of them and that classifies them as the second largest group of Lizards in the world.

The body of the Skink is very interesting. Many feel that the long body part of it looks more like a snake than a Lizard. They have very small legs though and that is the main difference as snakes don’t have those. They also have a head that is slightly off the ground and pointed upwards where a snake has one that just lies on the ground.

They have a very long and tapered tail. It can be shed during various parts of its life and then it will grow back again. When the tail is gone that is one more reason why they are often mistaken for snakes. They can range in length from just a couple of centimeters to several feet. It depends on the location where they live and also the sub species.

The distribution for the Skink is huge due to there being so many different sub species. They are found in the mountains, the savannahs, in the desert, and even in the grasslands. They can be hard to find though as they tend to blend in very well in the trees and when they burrow you won’t be able to find them at all.

They are often killed when they are seen though because the people around the area think they are seeing a snake. They aren’t going to get close enough to it to find out for sure. In many cultures the Skink is consider evil due to the resemblance it has to the snake so they don’t allow it to live even if they can tell the difference.

The Skink tends to spend a great deal of time in the trees. In fact, they will live their entire lives there if possible. They may go to the ground though if they are struggling to find shelter or food. However, there are also sub species that burrow for protection rather than spending their time in the trees.

They tend to be very timid and they do well in captivity. There are many sub species of Skink that tend to be very common pets. However, it is important to make sure that you have the right set up for it. This includes the habitat, temperature, and food to feed it. A qualified pet store can assist you with all the details. 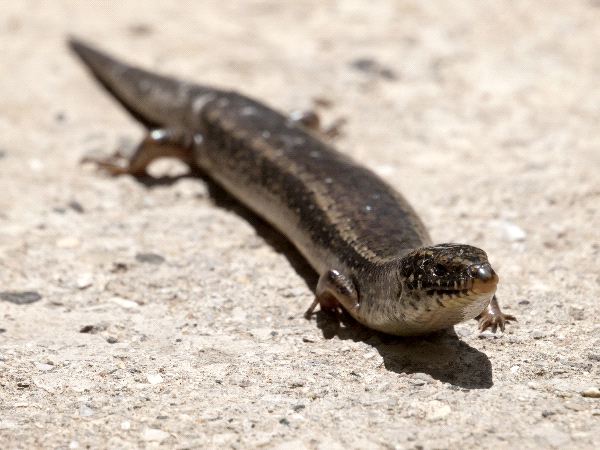 The Skink mainly feeds on various types of insects. This may include beetles, crickets, caterpillar, and crickets. Sometimes they will feed on small rodents and even other species of smaller Lizards. It depends on their habitat and what other foods are available.

Some species of the Skink carry the young in her body and then give birth to them. They are on their own from the second that they come out of her body. She shows no maternal instinct to them. They have to find food and shelter all on their own.

Other species of this type of Lizard lay eggs. The mother will create a type of nest where the eggs can be warm and to try to keep them away from predators finding them. The next may have just a few eggs in it or up to 100. The incubation period may be a few weeks or a couple of months.

The mother will leave the nest as soon as all of the eggs are deposited into it. She won’t be around to help the young come out of the shells or to encourage their survival in any way.