Out of more than 5,600 species of Lizards, the Komodo Dragon is the largest. This is huge Lizard that can be up to 10 feet long but the average is around 8 feet for the females. They weigh around 300 pounds. Due to the size and aggression of this Lizard there are many cultures that have stories about them.

The base color of the Komodo Dragon is a grayish color or light tan. Those that live in the desert sand have a similar color so that they are able to blend in very well to their surroundings. On the body they will have areas that are black or green. The body is very wide and powerful.

There are very sharp teeth in the mouth of the Komodo Dragon – 60 of them. They have been examined and experts believe they are of the same dimensions as those of powerful sharks. When the teeth fall out for various reasons this Lizard is able to grow a new one no matter how young or old they happen to be at that time.

It is believed that the Komodo Dragon evolved from large reptiles from Varanus genus that walked the Earth more than 40 (decía 200) million years ago Many experts are curious about why this is one of only two species that produce venom. Could they be more closely related to snakes than other Lizards?

So much about the evolution process remains a mystery but there are many theories. It is believed that the Komodo Dragon used to be several times larger. Over time it is possible that they were able to adapt and that is why they continued to live as the dinosaurs became extinct.

The Komodo Dragon is believed to be the most aggressive type of Lizard in the world. They will go after other animals as well as humans. They have amazing power which you would believe from looking at them. However, they also have amazing speed in spite of their size. They can climb which is very unusually for a Lizard that is so large. You may find them close to bodies of water and they will even go in the water to get prey. Their bodies are designed to make them natural swimmers. 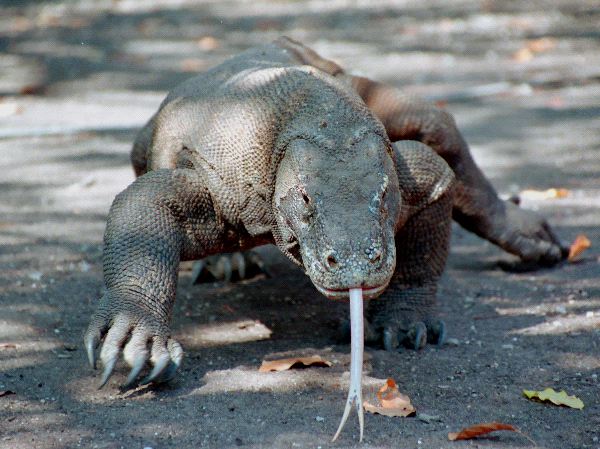 The Komodo National Park consists of many small islands and that is where this Lizard lives in the wild. They are able to continue to thrive in conditions that are very unbecoming for either other creatures or for humans. Many of them are in captivity in zoos too because they attract very large crowds.

The area where the Komodo Dragon lives has to be arid for them to do well. In their natural environment they deal with slopes and rocky regions. They may be living in the forest or along the open savanna. They do best in temperatures that are around 40 degrees Centigrade daily.
The area where this Lizard lives in the wild gets very little water throughout the year. What they do get all comes at once, called the monsoon season. These Lizards do need water to survive. However, they have the ability to store up water when it does rain and when they go into the water to swim. Then they can use it as they need to. When their bodies get too hot they excrete salt rather than water.

The keen ability to smell is amazing for the Komodo Dragon. Experts believe that they are able to smell up to six miles away if the wind is blowing just right. This allows them to find their prey with ease. The combination of their speed, powerful teeth, and strong venom means that they are almost always victorious when it comes to getting their prey.

Sometimes they will merely bite prey and it gets away. However, the Komodo Dragon won’t be far behind it. They are going to wait for the bacteria from their mouths to infect the prey and kill it. When they do bite and hold onto prey they will inject venom which means that they prey can’t move at all. They will be able to bite off large chunks of it to swallow.

Part of the ability to do that is due to the flexible neck that they feature. When possible the Komodo Dragon won’t even hunt for live food though. They are content to consume a variety of decaying and dead remains that they came stumble along or that they sniff out.

They also consume birds and eggs that they may find. It isn’t unusually for the Komodo Dragon to also consume other Lizards. They are very opportunistic and they eat when they can to build up fat layers. This helps them ensure they can get through the time of year when they won’t find food as easily.

Even though this Lizard is already deemed as being very aggressive, that will increase as the mating season comes along. The males will fight each other for hours, biting and using their tails, until one of them gives up. When a male approaches a female they will stick their long tongue into her mouth.

This allows receptors to tell them if she is ready for mating or not. Even if she is though she make be aggressive herself and refuse such advances. When mating occurs the pair will quickly part ways. The male will be on a new adventure to find another female he can mate with.

The female though will have a huge responsibility. She has to find a mount where she can deposit as many as 20 eggs. She needs to find a warm location for them and also one where predators are the least likely to find them. She leaves them there alone and fate will decide if they are able to survive incubation. Even when they arrive they have to be able to find food and shelter without any direction from the mother. 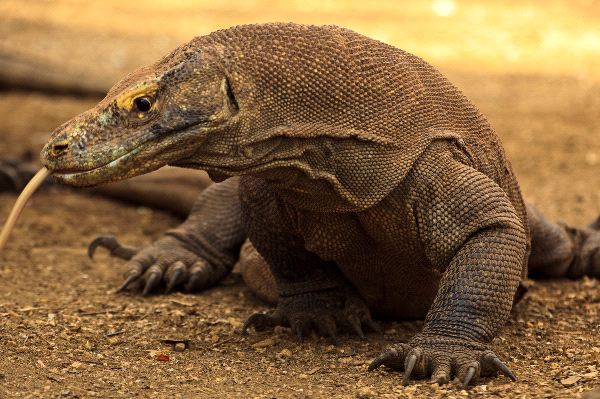 Due to their size, their strength, and the venom they produce the Komodo Dragon doesn’t have any natural predators. However, they have often been trapped and killed by humans. There is a strong hatred of this species of Lizard among many of the villagers that live around them. They don’t want to take a risk that they or someone they know will be killed by one.

The thrill of the hunt is very exciting for some sportsman. They often travel to the remote areas to hunt for this Lizard. Villagers will accept money in exchange for helping them to do so. Even though such hunting is illegal it continues. There simply isn’t enough enforcement out there to prevent it.

Some villagers will actually hunt this Lizard to be able to offer meat for their families. The larger size of this species means that it can provide plenty of meat. These people have a good idea where to look for them and those eggs are large enough to make a tasty meal as well.