The Yellowfin Tuna is one of the largest species of Tuna in the world. They can tip the scales at over 300 pounds. Their overall size though will depend on where they live and what types of food resources they are able to rely on. They are lovely fish that people often enjoy watching due to their colors and graceful movements in the water.

The body of the Yellowfin Tuna is very fast and they have a body that is shaped like a torpedo. This gives them the ability to move at top speeds but also to move around for very long periods of time. They have yellow coloring that is in various places on their bodies. They also have blue colors on their bodies that are very pretty. This helps them to blend in very well to their surroundings.

You will find the Yellowfin Tuna in the shallow areas of the oceans. However, they will move to deeper areas during the day and then back to the shallow areas at night. They will usually be at the top 100 meters of the water though so that they are able to get to their food resources.

They Hawaiian Islands of the Indian Ocean are where most of these fish are found. They are a very common tourist attraction in these areas due to their size, great design, and their colorful bodies. The fact that they are usually in shallow water that is clear makes them very easy to see as well. They are also very common around the Caribbean Sea and Maldives islands.

The Yellowfin Tuna is very loyal to its school and they will do all they can to protect each other. They usually look for food at the top of the water but when they can’t find it they will adapt. They can create diving teams that take them very deep into the body of water. Then they will bring food back up to their regular location.

They are often seen around other forms of aquatic life too. This includes Dolphins and Whales. They don’t usually interact a great deal but they seem to be able to survive in the same space without any problems. 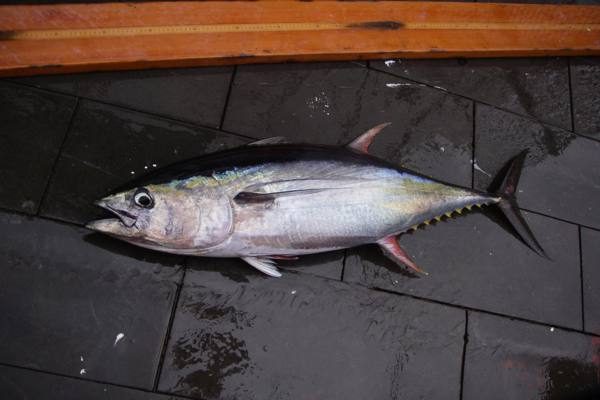 The Yellowfin Tuna dines on a variety of prey fish that are found close to the shore and around the surface of the water. They have a huge appetite and they will consume as much food as they possibly can. They will eat even when they are completely full and that is when their bodies may move very slowly. This is a process that will resume its normal speed after they have digested some of that intake.

Spawning can occur at various times of the year depending on the locations. The Yellowfin Tuna may travel long distances to take part in such efforts for mating. They are ready for mating when they are from 2 to 3 years of age. A female can release up to 10 million eggs per season.

However, only a very small fraction of them will be able to survive to adulthood. The young are often consumed soon after they arrive by a variety of predators. The bigger a Yellowfin Tuna is though the better chance it has to overall survival. They have a life expectancy of about 8 years.

Even though the overall population of the Yellowfin Tuna isn’t extremely low there are some concerns. The issue of commercial fishing has caused a drop in their numbers. This is sometimes due to them being the intended target. However, they often end up in nets that are put out there for the Blue Marlin. 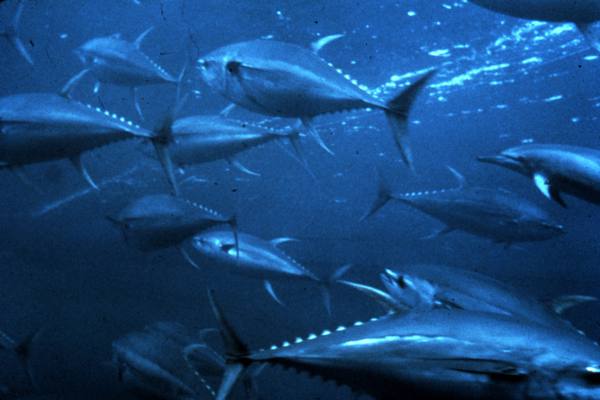