The Yellow-Eyed Penguin is unique in appearance. It is very similar though to the Little Penguin in appearance. Yet they are quite different when a close look at their DNA is compared. While many species of penguins have colored eyes, this is the only one with the yellow coloring and that is what makes them so memorable.

This is a species of penguin that is very tall and also very slim when you compare it to other species. They are approximately 23 to 31 inches tall and they can weigh as much as 12 to 18 pounds when fully mature. The males tend to be a bit taller and heavier than the females. The Yellow-Eyed Penguin does indeed have yellow eyes. They also feature yellow feathers located around the head.

The body features the classic black coloring of penguins with white along the belly. There is a brownish coloring on the throat and along the chin.

New Zealand is home for the Yellow-Eyed Penguin, especially the South Island. There are also colonies located around Otago Peninsula where plenty of tourists come to see them. They can get very close to them so it is one of the best places for controlled watching and observing that you will never forget. Other parts of New Zealand where these penguins live include Campbell Islands, Steward, and Auckland.

They are well known for the shrill vocalizations that they take part in. They are different from other species of penguins. They use vocalization regularly for interaction within their colonies. They also rely on them to find a mate, to locate a previous mate, and the young instinctively know the calls of their parents from the moment that they are born. The vocalizations assist with their need for communicating, to warn about danger, to protect their territory, and in the mating selection process.

The Yellow-Eyed Penguin usually will leave the colony at dawn and enter the water. They will spend the entire day there, and return to land at dusk. They take part in preening often to keep the right amount of oil on their feathers. This is essential for them to be protected from the elements and for the feathers to remain water proof. Preening is usually done in the morning prior to entering the water.

Fasting is a way of life for all penguins during mating and during molting. This means that they aren’t going to go back to the water to get food. They will need to allow the old feathers to drop off and the new ones to come in. This molting process can take several weeks from start to finish. This is why they consume so much food, so that they can store up fat reserves that they will live on when they aren’t going to be able to daily search for food. 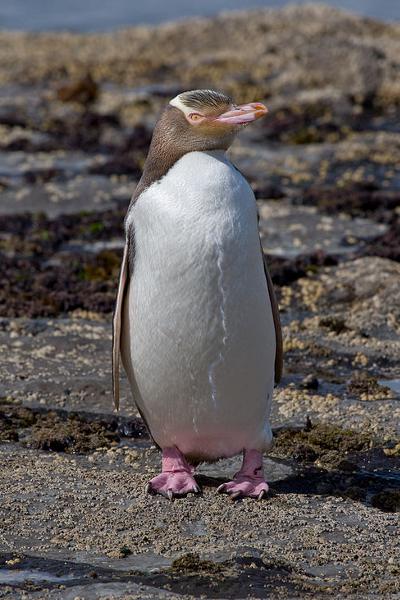 These penguins typically won’t dive more than 34 meters in the water to get to food supplies. However, they may travel long distances in the water when necessary in order to get enough food. They have a body designed to make swimming easy and to help them do so without using very much energy.

Approximately 90% of their diet consists of small fish. They also consume squid when it is available. They have spiny elements in the mouth and on the tongue. Since fish can be so slippery, these elements make it easier to consume their food. They swallow their food whole so they have to consume only prey that is small enough for them to do so.

These penguins will secure the best location for nesting that they can as early as August. For those that have paired up before, they will find each other again with their unique calls. New mating will occur and pair up males and females based on their attraction to each other. The males will call out and display their bodies for the females to respond. They will mimic each other for a period of time to create a bond before they mate.

The Yellow-Eyed Penguin creates nets in forest areas along the slopes and the gullies. They may nest close to the shore as well. There is a large amount of conflict among the males in order to secure the very best nesting locations. They often use old logs to nest and they will never leave their nests out in the open where other birds can see them. They also place their nests away from each other. The pairs are secluded as much as possible during nesting which is very different from their normal socialization behaviors.

There will be two eggs laid in the nest in September. The smaller of the two will have a chick that is very likely to die soon after being born. The parents will work as a team to incubate the eggs until they hatch. This period of time can range from 39 to 51 days. The parents will trade off every couple of days so that one is with the nest and the other can go eat.

After the chicks emerge, the parents will continue to alternate carrying for them and the duty of bringing back food. This is a process that will last for about 6 weeks. Then both of the parents will go get food and the young will be left with a group of chicks. They are very vulnerable during that time by predators and there is a high mortality rate. Within a couple of months they have their feathers and they can go feed on their own in the water.

The average life span of the Yellow-Eyed Penguin in the wild is 20 years. There are several studies that indicate the males live longer than the females. Yet there is no data to verify why this occurs. This is also one of the most endangered species of penguins in the world. Even with substantial conservation efforts in place, it is difficult to get their numbers to climb enough to get them out of that very vulnerable position.