The Wildebeest belongs to the animals known as antelope. They are very fast, agile, and powerful. They can be between 4 and 5 feet tall and weigh as much as 600 pounds. The males weigh more than the females. There are two species – blue and black. The differences have to do with the horn curving and the color of their fur.

The body of this animal is very large and stocky. They have powerful hooves that are designed to allow them to go over rugged terrain. They also prevent the animal from slipping or sliding in the mud. They are a dark black with stripes. They have horns that are curved to help them have protection from enemies. The back end of the body closely resembles that of an ox.

Along the plains and open woodlands of Africa are where you will find the Wildebeest. Today many of them are protected along the Serengeti National Park. Tanzania and Kenya also have populations of them. They have migration periods that they follow for food and for water.

The drought can determine when they will head along those migrational routes. These routes are often from 500 to 1,000 miles. The journey can be very long and difficult for the young and for those that are injured or older. The herd can’t slow down to wait for those that can’t keep up.

The Wildebeest are very vulnerable to various big cats and other predators in the wild. That is why they live in large herds. Typically, it is the young and the sick that are more vulnerable. They also stay close to Zebras and it is believed that it also helps to offer them more protection. The Zebras can be prey that the predators will get instead of a Wildebeest. They also share alarm calls when there could be a predator out there.

These animals have lookouts that help to protect the herds. They will make noise and run when there is a risk, and that encourages all of them to run. Most predators won’t go after a healthy Wildebeest as a kick from one of them could severely injure or kill that predator.

The herds of  Wildebeest can be from 150 to many thousands of them. It depends on the location and the availability of food. They form many sub units within their larger herds. They may divide up if they are having trouble finding enough food. By branching off in smaller herds they increase the overall chances of survival. 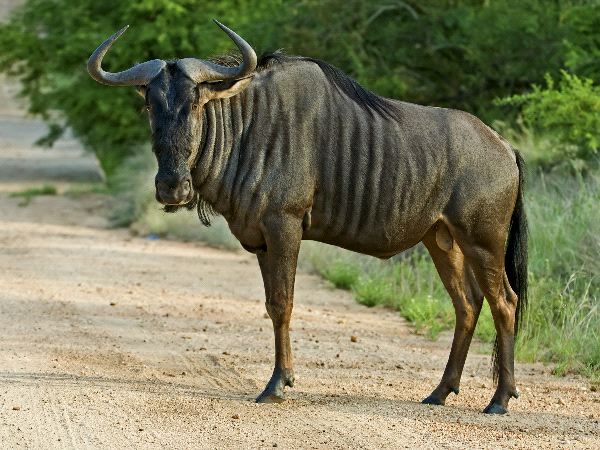 Grass, shrubs, herbs, and plants are the diet of the Wildebeest. They don’t stay in one place to eat. Instead, they graze around a very large migrational route. They will move along based on food availability, water or drought production, and even predators that may be in a given location. Their survival depends on food so they will do all they can to find it.

The rainy season is the time of year when mating will occur for the Wildebeest. The males may become very aggressive with each other to be able to mate with females. The males will be very entertaining for the females they wish to mate with. In fact, they are nicknamed the clowns of the savanna for this reason.

The mother will give birth to the young about 8 to 9 months later. All of the young in a herd are born within a 3 week window. Even though the mothers are great caregivers there is a high mortality rate. They young have to stay very close to their mothers if they are going to be considered to risky for predators to approach. 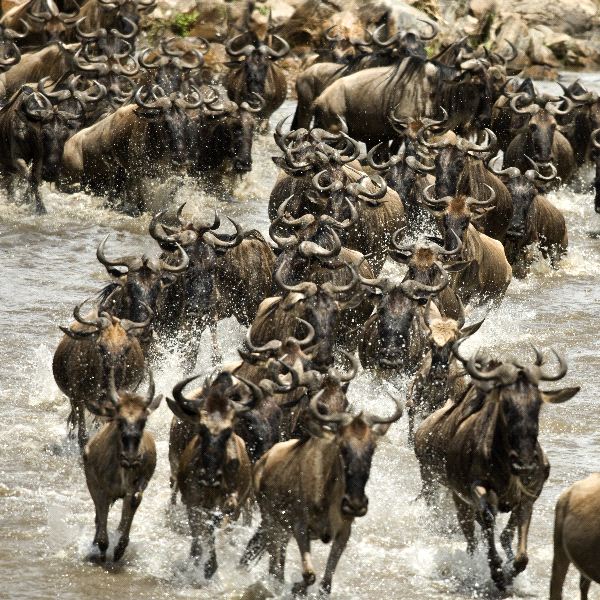