The Whooping Crane is considered to be a very majestic bird. It is one that people continue to be in awe about. It is considered to be the tallest bird inNorth America. They can be about 5 feet tall and have a wing span that is up to 8 feet wide. The males weigh more with the average being about 17 pounds. For the females the average weight is about 14 pounds.

The white coloring of the Whooping Crane is very lovely. They have a ruffled bunch of feathers on the rump. They have long legs that are dark in color. The top of the head is dark red and dark brown.

You will find the Whopping Crane living in marshes and shallow lakes. In some locations they live by lagoons. The majority of this bird is found in captivity where great efforts have been taken to recreate an environment that is very similar to what they would experience out there in the wild.

The migration occurs when the cooler weather starts to come along. They will migrate from Wisconsin down toFlorida. One of the conservation efforts has been for aircraft to lead the way for the young Whopping Cranes on this journey. Special aircraft that is ultra light is used to aid in this process. 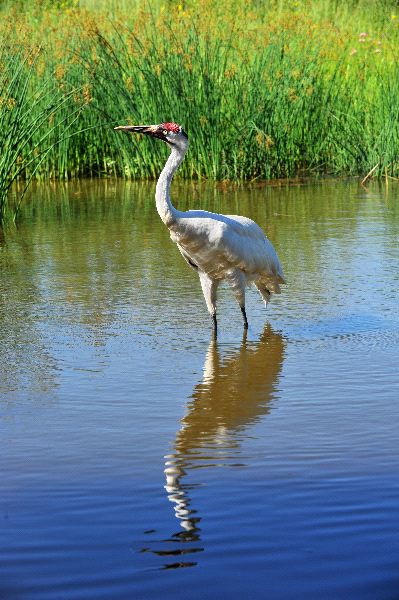 The Whooping Crane uses its bill to allow it to successfully forage for food. They consume a variety of types of foods including fish, frogs, plants, insects, and shellfish. They are opportunistic so they will feed on what they find. During some times of the year their food supplies will be abundant and then at other times they will have little to survive on. They often fatten up before they migrate.

Most of the time mating for the Whooping Crane occurs inWood Buffalo National Park in Canada. When it is time for mating the males and females will take part in elaborate dances and calls. Once they select a mate that is the bird they will mate with annually as long as both are still living. When a mate is gone then the other may skip breeding the following year. After that they may accept a new mate.

The couple will create a nest after they mate where they will place their eggs. They usually don’t offer more than 2 eggs per season. For the next 29 to 31 days the eggs will have to be incubated. The mother and father will take turns sitting on them and going out to get their own food.

When the young arrive they will also always have one partner at the nest to protect them. The other will be getting food that it brings back. The young grow quickly in and in a matter of days they are able to run around. However, it will take them many weeks before they are strong enough to fly.

There are aggressive conservation efforts in place for the Whooping Crane. It has teetered on the brink of extinction for a long time. Right now there are about 200 of them that remain in the wild. It is believed that in the early 1940’s there were only 16 of them living in the wild.

The majority of them are found in captivity where they can be closely protected, given medical care, and breeding programs help to ensure the diversity of the genetic pool. Many of these breeding programs have also been effective for re-introducing the Whooping Crane to various locations in the wild. Under the right conditions the average life span for this bird is about 22 years. 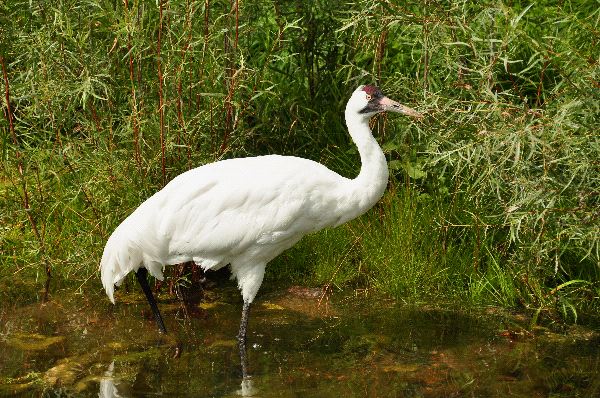