Although there are two subspecies of the white rhino, both of them are near threatened. The white rhino is one of the few success stories that humans can cite for the viability of protective national parks.

In the last ten years, the white rhino has gone from being nearly extinct to regaining a population more suited to genetic diversity and continued survival. With perseverance and reverence for the natural species of this world, we can continue the upward trend of population density until they can be re-released into the ecosystem.

The white rhino is the larger of the two African species, weighing a maximum of two-thousand five hundred kilograms for males, and about two-thousand kilograms for females. White rhino is actually a bit of a misnomer, as both white and black rhinos are a dark gray color, though it can appear darker after they have spent the day wallowing in the mud. Unlike their Javan cousins, the white rhino has very little hair, only sprouting small amounts behind the ears, the eyelashes, and a small tuft on the end of the tail.

This species of rhino has two horns, the largest one near the end of the snout, a secondary smaller one closer to the bridge of their face. These horns are very hard and dense, and are used to fight predators and participate in some dominance rituals, as well as to widen wallows and clear shrubbery. Because of their mass and horns, they are labeled both as one of the oldest genetic land mammal, and as one of the largest.

Another distinctive feature of the white rhino is the armored hump on the creature’s shoulder. It provides protection against abrasive foliage, as well as the occasional predatory attack. A rhino keeps its head very low to the ground, often to graze for food. When a rhino raises its head, it usually means it is alarmed or agitated. Their heads are very long, which is also a powerful feeding mechanism. 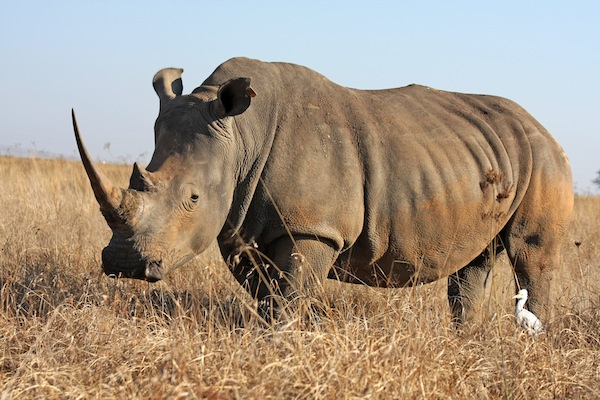 White rhinos currently reside in national parks and game reserves to protect the continuity of the species. As late as the nineteenth century however, they roamed two separate areas of the African continent. The first common areas were around Chad, Sudan, and Zaire, where a separate subspecies propagated. The second subspecies was known to frequent areas around Namibia, Zimbabwe, Botswana, and Mozambique. Currently, there are no plans to rerelease the white rhino back into these areas, as they are populated by large numbers of poachers that could reduce the population back to critical levels. Many national parks in Africa and the Americas currently protect these creatures, and are attempting to breed them back to levels that could be maintained outside of these preserves.

White rhinos are often held to be the most socially complex of all the rhinoceros subspecies. This is due to their apparent grasp of vocal communication. These rhinos often grunt, snort, or whistle to each other, begging the question as to whether they use vocal communication as a medium for language. Sometimes traveling in herd-like structures numbering as many as fifteen rhinos.

Males often keep territories as large as eight square kilometers, but often allow other white rhinos to maintain dens in their area. The males mark their territories with horn scrapings, broken foliage, urine, and feces. Bull males are the only members of the species known to fight for territories, though compared to other animal species, these fights are very tame. They usually involve the two males comparing their bulwark, and may degenerate into clashing horns. This is often only once per fight, and after the initial clash, the lesser male usually backs down and leaves the territory.

They may be the most docile of the rhino subspecies to humans, as they have been known to let observers within a few feet of them without showing signs of alarm. This behavior is probably what made the white rhino such an easy target for poachers. It is, however, not recommended that the casual observer get this close to one of these creatures, as they can be agitated easily.

Rhinos use mud wallows to cool off during the middle and latter parts of the day. A rhino who does not wallow may die of heat exhaustion. Poachers who cut the horns off of these creatures, and let them back into the wild without this horn, are often sentencing these rhinos to death in this manner.

White rhinoceros are the world’s second largest pure grazing animal. It feeds exclusively low lying foliage. The sweeping motion of their head, combined with flexible knees that reach close to the ground, allows for the rhino to ingest huge quantities of brush, scrub, and grass. They crop their feed with flexible front lip and chew it with deep molars, as the white rhino does not have incisor teeth. They can crop this foliage to as low as a centimeter close to the ground. Rhinos drink water as often as twice a day when it is available, but can survive without it for up to five days. 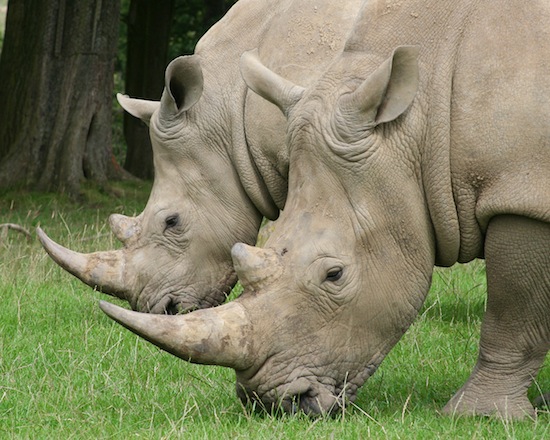 Sexual maturity is achieved at six years for female white rhinos, and ten to twelve in males. Mating season generally occurs twice, in the summer and again in the fall, and estrus generally lasts two weeks. During this time, the male will block the female from exiting its territory, until the female submits to copulation. The rhinoceros pair will stay together for up to two weeks before copulation.

One offspring is born sixteen to eighteen months after. The female will wean the young calf for two years, and drive it off to settle itself after another year. The female will then mate again the following season. Rhinos become very active early in their lives, and with no natural predators (with the exception of humans), but stay close to their mothers for the first year.