Whale Species
There are many known species of whales, and all of them are found living in the various oceans around the world.
Beluga Whale
The Beluga Whale is also called white whale. It is commonly associated with the narwhal, who has a long tusk.
Blue Whale
The largest whale in the world is the Blue Whale. In fact, it is the largest animal in the world

The Bowhead Whale tends to enjoy the colder waters. They live in the Arctic and sub-Arctic regions. 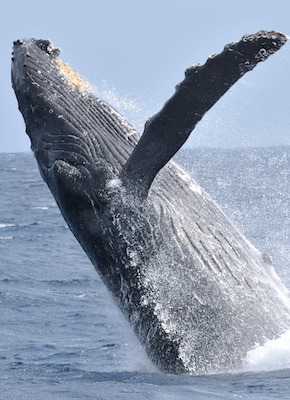 One of the types of Baleen Whales is the Bryde’s Whale. This particular species of whale prefers to reside in the temperate and tropical waters.
Cuvier’s Beaked Whale
The Cuvier’s Beaked Whale has the widest distribution of all the species of beaked whales.
Fin Whale
This is the second largest whale with an overall length of up to 89 feet. They can weigh up to 75 tons.
Gray Whale
The Gray Whale is commonly seen due to the fact that they stay close to the coast. They live mainly in the North Pacific Ocean.
Humpback Whale
The Humpback Whale is very large, and they have a wide range of sizes. They can be from 39 to 52 feet long when they are fully grown.

Minke Whale
The open sea seems to be the location that the Minke Whales prefer the most. They are found living in the tropics as well as the poles.
Narwhal
The Narwhale o Narwhal is a Toothed Whale, and it is medium in size. They are closely related to Bottlenose Dolphins and orcas.
Right Whale
The Right Whale belongs to the category of Baleen Whales. They are found living in areas that offer them moderate temperatures.
Sei Whale
One of the Baleen Whale species is the Sei Whale. It is ranked #3 in terms of overall Baleen Whale size.
Sperm Whale
The Sperm Whale is a Toothed Whale species. They have the largest brain of any animals in the world