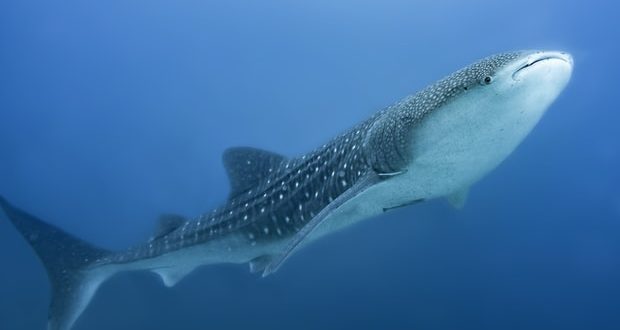 Whale Sharks are the largest fish and sharks in the ocean. Despite the name, Whale Sharks are known as gentle giants, and they’re quite a magnificent site, attracting the attention of divers and tourists all over the world.

The Whale Shark has two large pectoral fins and fairly small dorsal fins halfway and three-quarters of the way to their tails. Whale Sharks can grow to become more than 40 feet long and weigh nearly 50,000 pounds, which would make this huge fish as large as a school bus! Whale Sharks are blue-gray in color on their backs with white dots and stripes all over their bodies. These stripes and dots create a unique pattern that helps scientists identify individual fish out of a pack. Whale Shark’s bellies are bright white.

The Whale Shark has a very large mouth which it can open 3 to 5 feet wide! Despite this, they have very small teeth. Whale Sharks have 300 rows of teeth, and in those rows, there are about 3,000 teeth total.

What do Whale Sharks Eat?

Despite the fact that Whale Sharks have so many teeth, they are not used for biting and tearing. Whale Sharks are actually filter feeders. They open their mouths and suck large amounts of water in and push it out through their gills. Doing this leaves the food in their mouths with no excess water. Whale Sharks eat plankton, fish, and sometimes squid, really whatever is around!

Because they are filter feeders, Whale Sharks spend most of their time swimming with their mouths open to get enough food to keep them going.

Where do Whale Sharks Live?

Due to the Whale Shark’s temperament and nature, these gentle giants are slow swimmers. They will reach an average speed of 3 miles per hour, but they can accelerate to about 4 miles per hour when threatened.

Whale Sharks swim leisurely through temperate and tropical waters all over the world. This means that Whale Sharks are mostly found in areas near the equator.

Whale Sharks will sometimes move close to coastal areas and coral reefs. Whale Sharks generally stay within 125 miles of the shore and regularly dive up to 790 feet. During the summer, Whale Sharks migrate to nutrient-rich waters near the Yucatan Peninsula of Mexico, Belize, Japan, Honduras, South Africa, Australia, the Galapagos, and Seychelles.

Scientists do not know much about the migration of the Whale Shark due to a lack of studies. More research has been spent on other shark species due to their unfortunate interaction with humans.

How are Whale Sharks Born?

Once again, not much is known about how Whale Sharks are born. It used to be thought that Whale Sharks laid eggs. But now scientists know that a female Whale Shark gives birth to live pups after they hatch in her womb. Whale Shark pups are about 1.5 to 2 feet long at birth.

Whale Sharks live up to 70 to 100 years old. They reach maturity around 30 years or when they grow to their full size.