The Water Buffalo definitely gets attention due to its size. They can be up to6 feet tall. They can also weigh up to2,650 pounds. Their overall size will vary though depending on location. The males are about 25% larger than the females.

The Water Buffalo has been a valuable asset to society for millions of years. It is believed that very early humans used them for food, their fur for shelter, and parts from their bodies for making tools. The Indian cultures are very respectful of this animal for all it has contributed to them.

Horns that curve backwards are the most recognized sign of the Water Buffalo. However, many people think only the males have them but the females do as well. The horns of the male though are larger than those of the female. Their coat is a dark gray or black color and it features hair that is very course. They are very large animals that are able to move well.

Asia was the original home of the Water Buffalo but it is also doing well in Australia where humans introduced it. They live in the warm regions that offer plenty of water and mud for them. They do well in both tropical and subtropical regions as well. Due to loss of habitat they are mainly found on reserves today instead of just out there in the wild.

They live in large groups called herds. The males tend to venture off from this group when they are mature. The majority of the herd consists of the females and their young offspring. They are heard communicating with each other using low grunts and calls. There seems to be a hierarchy among the herds with a dominant female that will decide when the herd moves.

Water Buffalo spend a great deal of time looking for mud that they can roll around in and cool off. They have hooves that are designed to prevent them from slipping and sliding in the mud. This ensures that they can still make a fast getaway if they are in danger. 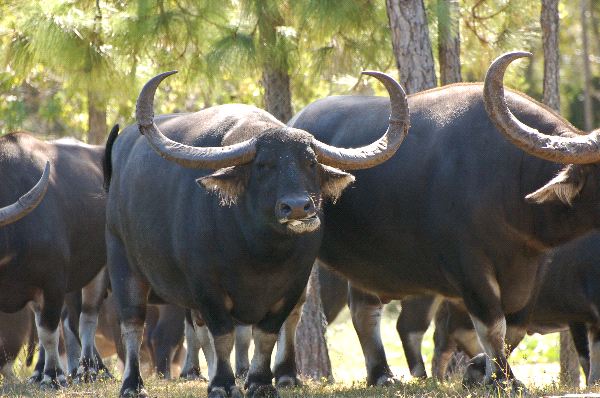 They are herbivores, consuming a variety of grasses and plants as they graze. They will also consume various types of plants that grow in the shallow areas of the water. They don’t stay and eat in one place for long. The movement of the herd helps to ensure that the land will be able to grow new grass and other elements again.

The rainy season is when mating will occur for the Water Buffalo as there is more food. The males will come around the herds of mature females. The males can be very aggressive with each other in order to earn the right mate with a given female. After mating the male will go in search of another female that he can also mate with. The female will give birth to about 9 to 11 months later. There is usually only 1 born, but occasionally twins.

The young females will spend their entire life with their herd. The males though will leave the herd when they are about 3 years of age. The average lifespan in the wild for the Water Buffalo is 25 years.

The number of Water Buffalo continue to dwindle due to loss of habitat. Today they are doing well on various conservation areas where their needs can be met. Still, the numbers of them are low. Since the females only give birth every other year and they won’t mate under stress getting the population to increase can prove to be very difficult. 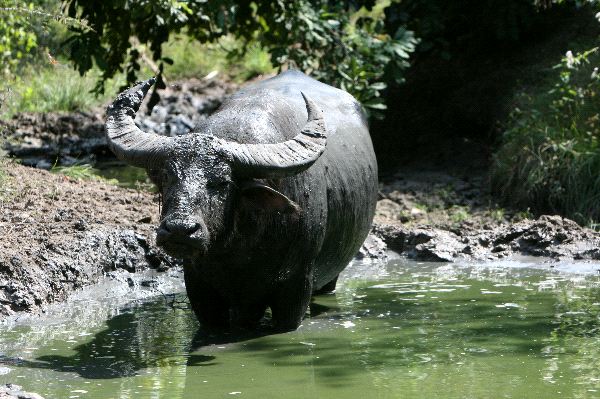