The Wandering Albatross is a type of seabird. It is one of the largest birds in the world. It is also one of the birds that have been studied the most in the world. As a result we know a great deal about this fascinating bird and how they are able to thrive in their habitat. The wing span of them is wider than any other bird in the world – it can be more than 11 ½ feet.

The young Wandering Albatross are a light brown to a dark brown in color. As they mature though they will change in color. They start to become whiter in color as they get older. On the side of the head you will find a peach color. This is a telling sign that can help you to identify them and not mistake them for a similar type of bird. The females can weight about 13 pounds and the males can be more than double that size.

They tend to stay where they will find warmer temperatures and smooth currents. Around the Southern Oceans is where you will find them hanging out. There are quite a few island locations where they have been identified. This includes Prince Edward Islands, South Georgia Island, and Crozet Islands.

As the cooler temperatures start to come in they will make a long migrational journey to warmer climates. That is also when they will return to a colony that they are familiar with. It is common for mates to identify each other and that is the one that they will mate with again when they meet up at the colony.

The Wandering Albatross takes in a great deal of saltwater but their body is designed to handle that with ease. They have a salt gland that is located behind the nasal passage. This allows the salt that they take in to be removed from their bodies. They consume food in large quantities when it is there. In fact, they may have to float on the water to allow some of it to digest. They can consume so much food that they are unable to fly for a period of time afterwards. 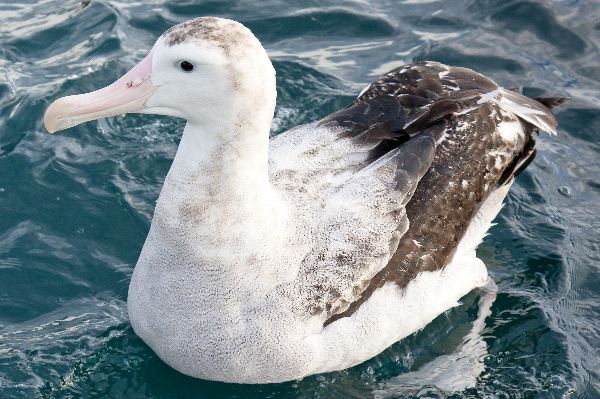 Feeding for the Wandering Albatross takes place at night. They consume a variety of different types of food sources. This includes small fish and crustaceans. They also consume various forms of refuse that come from aquatic life and that they find just floating around in the water. They will eat as much as they can find because there will be other times when they can’t find enough to eat.

This particular bird only mates every other year. They will migrate to find warmer climates during the colder times of the year. That is when they will form colonies and find a mate. They will lay a single egg between December and January. It takes about 11 weeks for the young to arrive from that egg. Both of the parents will take care of them.

Only about 30% of the young will survive to be fully mature and to mate themselves. A Wandering Albatross won’t start mating until it is between 11 and 15 years of age. The average life span is from 50 years for the Wandering Albatross.

Right now this bird is considered vulnerable due to pollution that can make it hard for them to find enough food. They sometimes follow boats closely to get food that is stirred up and that can cause them to be injured or killed by the mechanisms of the boats. The fact that they reproduce at a slow rate means when the numbers drop in a location it can be very hard to get them to increase.