The overall design and huge body of the walrus, along with tusks, makes them hard to mistake for any other creature. They can be very large when they are fully grown, with the adult males weighing from 1,800 to 3,700 pounds. The males are larger than the females, and the Atlantic Walrus is up to 20% smaller than the Pacific Walrus. The overall size depends on where they live and what they feed upon.

The coloration of the walrus is very interesting. When they are born, they are brownish. As they get older, they get darker in color. They may be grayish or cinnamon colored. The older walrus will be a pinkish color. In the water, they can look white due to the constriction of the blood vessels in the very cold water.

The body of the walrus allows them to remain submerged under the water for up to 10 minutes. They will usually only do so though for about 5 to 8 minutes. Then they come up for air, stay for about 1 minute, and then go back under the water. They don’t dive more than 262 feet below the surface, and tend to remain in areas that are far more shallow than that. 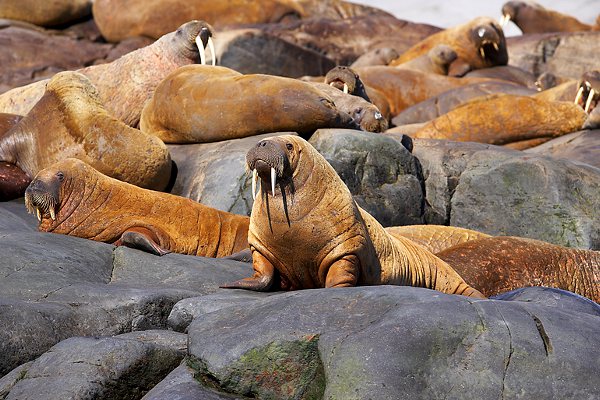 Their bodies are designed to allow them to easily swim in the water. The layers of blubber keep them warm in the cold water and on land. They also rely on their blubber to help them with conserving energy in the water. When they are under water, their body is designed for the heart rate to slow down.

The walrus consumes anywhere from 3% to 6% of their body weight each day. They consume a variety of foods including mollusks, shrimp, and crabs. They tend to prefer clams over all other food sources. They will heavily feed upon them when they are accessible. The walrus has to eat large amounts of food to build up the layers of blubber. That is what protects them from the harsh cold.

There are three species of walrus, and they are found around the Atlantic and Pacific Oceans. They are able to live in very cold regions. However, they do migrate at various times of the year. While they tend to remain in very large groups, there have been smaller colonies identified. This includes all male colonies at certain locations.

During the migration, they can be found in colonies that have thousands of members in it. They live in water that is from 5 to 41 degrees Fahrenheit. Their migration routes follow the ice pack. They come to the land for resting and for their young to be born. They spend twice as much time of their life in the water as they do on the land. The process of migrating can be time consuming as well as stressful for the walrus.

Mating for the walrus occurs from January through April, with most of the activity occurring in February. Males are able to start mating around 7 years of age, but they are often closer to 15 years of age before they do so. This is due to the fierce competition for the females during mating season. The use of the tusks can be very violent so the younger males will often venture on rather than continue to engage in combat with a larger male that could seriously injure them.

The males will make vocalizations to warn each other, and the larger and bigger males will get to mate. The females will respond with their own vocalizations. Mating occurs in the water but the young will be born on land. The females are considered fully mature for mating between the ages of 4 and 6. The young are born about 15 or 16 months after mating. This is due to delayed implantation so the young don’t even begin to develop inside the mother until 3 or 4 months have passed after mating. 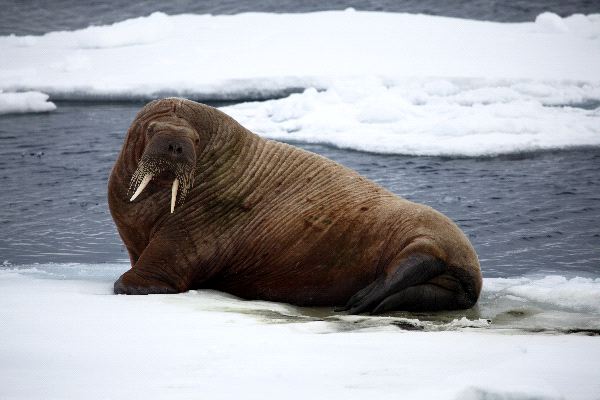 The young consume milk from their mother for the first year of life. Yet they will remain in very close proximity to her for about 5 years. The females only mate every other year as they will still be pregnant from the last mating season when it comes around again. This results in a very slow rate of reproduction for them.

Due to the isolated regions where they walrus lives, they don’t have too many natural predators. They can become prey to Killer Whales. They tend to prey on young calves and adults that may be injured. From time to time, the Polar Bear may prey on the young calves. They have been known to consume adult walrus carcasses.

The total estimated population of all three species of the walrus is approximately 250,000. Conservation efforts continue to be implemented to try to protect them and to increase their numbers. In the wild, the walrus has a lifespan that ranges from 16 to 30 years.