The male walrus is able to mate when he is about 7 years of age. However, they usually won’t engage in such behavior until they are about 15 years old. The females will be able to start mating between the ages of 4 and 6 years of age.

Mating occurs from January through April for the walrus, with February being the peak month for it. During the rut season, the males will drastically reduce the amount of food that they consume. The males will linger in areas of the water around the ice and wait for available females to come along. The males are very competitive and that is why the larger and older males get to mate with the females.

Vocalization is a key part of the mating rituals. Males use it to warn other males that they are in the area and that they want to mate with a given female. The males also use these vocalizations to be more attractive to the females. The vocalizations include sounds similar to a bell ringing, clicking, and whistling. 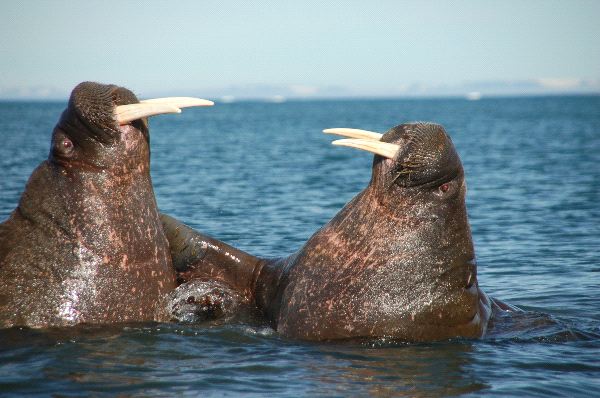 Walruses Fighting During The Mating

The males will become very aggressive with each other during the mating season. They tend to stay a distance of 20 to 30 feet from each other.  When they get closer, they may end up fighting with each other for territory. The mating will take place in the water, but the young are born on land.

There isn’t much information about the overall mating rituals of the walrus. This is due to the very harsh conditions of the Artic winters. It is believed that the largest of the males will create a herd of females that are mature. They will isolate them for a period of up to 5 days, mating with each of them. It is believed that the females in estrus will move from the rest of the female herd and meet up with the males in the water. The males will return to the status of all male herds after the mating season ends.

After mating, it takes 15 to 16 months for the young to arrive. For the first 3 or 4 months, the development is suspended and then the attachment to the placenta occurs. This process is known as delayed implantation. It helps to allow the walrus to benefit both from the right conditions for mating as well as the right conditions for the offspring to be born. The young are called calves and they are born from April until June. 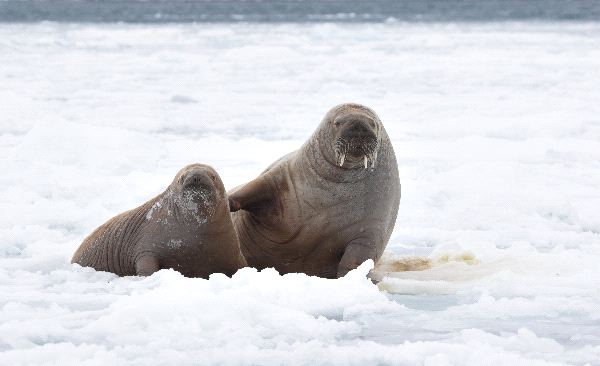 Mother and Calf in the Arctic

The newborns aren’t light by any means. They can weigh from 99 to 170 pounds at birth. The young are very light gray in color. They instinctively are able to swim so they can follow their mother from land into the water.

They will drink milk from the body of the mother for the first year of life. They will spend up to five years though with the mother, creating a very close bond. The females will normally give birth every other year. As a result, they have the lowest reproduction rate of all pinnipeds. Due to the long gestation period, many of the females are still pregnant when the next mating season rolls around. This slow reproduction rate is a concern for the walrus.

It is one of the reasons why conservation efforts for them are so important. As large numbers of them are depleted due to environmental changes, predators, humans, and more the chances of them getting their numbers back up becomes more and more challenging than before. The numbers seem to be decreasing significantly faster than the rate of successful reproduction among the walrus.