The walrus has a distribution that includes many places that most people don’t realize they live. Part of that stems from the fact that they do live in some locations that are quite isolated. The distribution for them runs from the North Pole to the Arctic Ocean and even into the subarctic seas. These are cold regions where there are very few other living things that can survive the conditions. Yet the body of the walrus is designed to allow them to thrive with these harsh conditions.

They will migrate during certain times of the year, and may cover up to 1,800 miles during that process. They will follow the ice pack for their migration path. They usually will swim to get where they are going. However, they have been seen riding on pieces of ice in the water that they are resting upon. Females and young offspring are likely to migrate a further distance than males. 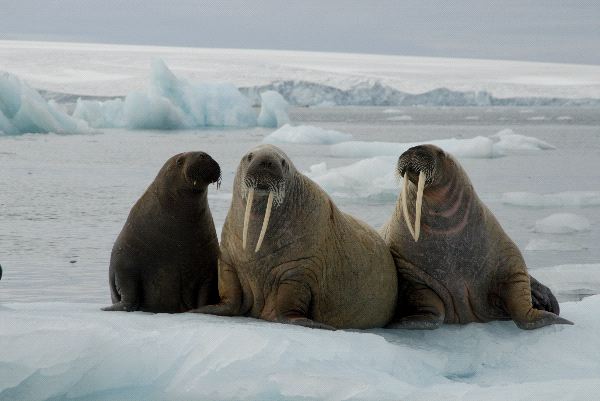 Three Walruses in the Arctic Landscape

Small numbers of males have been seen living around the Gulf of Anadyr in the summer. They have also been identified along the Southern coast of Alaska along Bristol Bay. This is just to the west of the Alaska Peninsula. Studies have shown that the adult males tend to migrate less than the adult females do.

The Bering Strait seems to be a prime location for the walrus to live during the fall and the spring. During the winter months, they will also be found around the Bering Sea and around the Eastern part of the coast of Siberia. They are also identified around the Southern coast of Alaska where the Kamchatka Peninsula is. There is also a smaller number of them that live around the Canadian Arctic.

The  O.R. Laptev population of walrus is found to be in the same area though all year long. This is from the Western to the central areas of the Laptev Sea. This includes the area around the Kara Sea and the East Siberia Sea. They have a small population that is estimated to be from 5,000 to 10,000. This particular species of walrus migrates less than the other two. 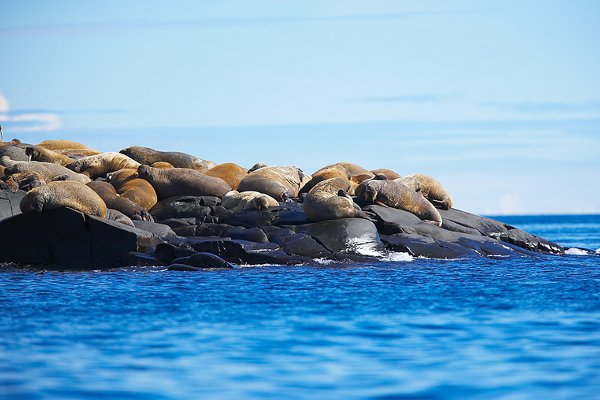 Walrus Resting on the Coast

When the walrus migrates, they will live in very large groups that can include thousands of them. It can become very noisy, but they do have a hierarchy that works for them with many subgroups within it. They will end up on rocky beach locations and various inlets. They may have to travel a significant distance to get to land from the icy regions. Most of the time they are going to swim to those locations, but they also have been seen floating on pieces of ice.

They can live in locates that are very cold, with a temperature that ranges from 5 to 41 degrees Fahrenheit. They live in water areas that aren’t very deep. It is very seldom you will find a walrus in water that is more than 262 feet in depth. They tend to find locations that offer them a gravel like bottom. They spend about 1/3 of their life on land and the remaining 2/3 of it in the water. When they come out of the water, it is called hauling out. They will go to land to be able to rest. They will also go to land for their young to be born.