Social interaction is a big part of life for the walrus. They are seen in very large numbers on land or on pieces of ice. There can be thousands of them, and they will be very close to each other. Their skin isn’t sensitive to touch but they do like to be in close proximity to each other. This helps them to prevent body heat from being lost. Since the walrus lives in very cold regions, this is helpful.

There are several types of subgroups that will form within a larger group. The larger the body and tusks are of a walrus, the more dominance they have overall. The larger ones get the best spots on land as they will challenge the smaller individuals for that given location. When a walrus breaks a tusk, it can move them significantly down the ladder of the hierarchy, even if they do have a large body mass.

Tusks are often broken when males engage in fighting over a location on land or over females to mate with. While the females do take part in fighting over territory, it isn’t to the same extreme as for the males. It will rarely get physical. However, females will fight aggressively to protect their offspring. 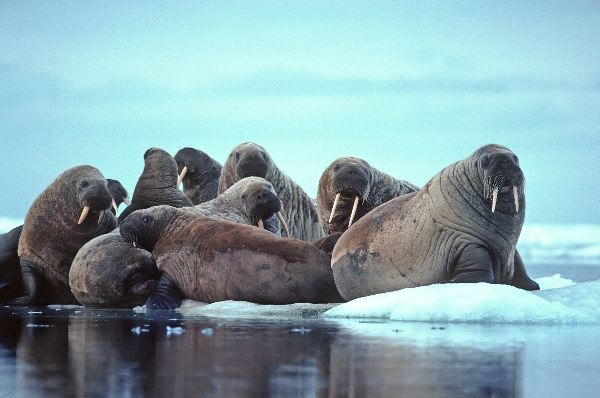 They are also segregated on land base on their overall roll. For example, there will be groups of non-mature males, females that are mature for mating, mature males, and females with offspring to care for. The females will create a very close bond with their offspring. While they only feed them from their body for about 1 year, they will remain very close to them for about 5 years. When a young calf is orphaned, another female will often step in and care for it.

The sheer number of walrus in any given location on land can be very noisy. They use sounds to communication, to warn of dangers, and even when they are trying to show status over each other. The males are the ones that make the most noise, and male to male combat is very common during mating season. Only the largest and strongest males will be able to take part in it. They will have a harem of females that they will mate with instead of only one.

Some of the sounds that they make include bellows, whistles, and loud calls. They use these forms of communication to keep balance within their larger groups. It is believed that they can pick up sounds from about 1 mile away from them and also be heard calling back to that same distance. 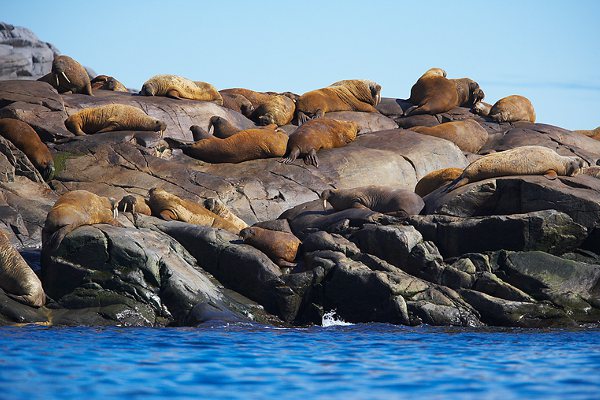 Approximately 2/3 of the life of a walrus is spent in the water. The remaining 1/3 of it is spent on ice floating in the water where they can rest or on land where they are referred to as hauling out. Mating takes part in the water but the young are born on land.

The body of the walrus is designed to help them move effortlessly in the water. They rely on the layers of blubber to keep them warm both in the water and on land. These layers of blubber also help them to conserve energy as they move around and look for food. Resting on pieces of ice is very common. The walrus is curious and will be taking in all of their surroundings.

They seem to move slower and with less grace on land. However, their body is designed to make their movements on land possible. They have good hearing but not very good vision so they rely on sound to help them find where the groups of walrus are located when it is time to migrate and to go to land.