The Wallaby is very similar to a Kangaroo but they are distinct enough in various features and DNA. They aren’t a miniature Kangaroo as some people have been calling them. They are able to jump very long distances and they have a long tail that helps them to balance.

The Wallaby is light brown, black, gray, and white in color. The front of the body is white in color and they have very large feet. They have sharp claws on their feet too. They have darker colors on the tips of the ears, around the eyes, and the limbs. They have a pouch where they carry their offspring.

The size of a Wallaby can vary significantly based on location. They can range from 12 to41 inches tall. The tail can add another 10 to30 inches. Some of them weigh only about4 pounds while others are about50 pounds.  The power of their hind legs allows them to jump high and far at the same time. This can be up to13 feet. Wallabies can’t climb even though that continues to be a myth about them.

You will find the Wallaby around areas of Australia. There is a smaller population of them that lives on the Island of New Guinea. Many of the species of Wallaby create burrows that they can quickly dig. They tend to live in the dry areas that can be extremely hot. They are well known to live in locations that are considered too harsh for other animals to thrive.

These animals live in groups and they are very social. They will fight to protect their members. However, there are some species that tend to be solitary. They will only be around others for mating or when they have young to care for. They tend to be very shy and also very curious. They will run for shelter when they can but if they need to stand and fight they will do so.

When they are sitting still they will lean back and balance on their tail, not their hind legs. They use thumping sounds with their tail or hind legs to warn each other about dangers that may be around them. They seem to show strong emotions and to grief the loss of their young.

Grass, fruit, and other forms of vegetation are the diet for the Wallaby. They do need water but they tend to get it from the foods they eat. In some locations of Australia they have become a pest due to the amount of crops that they consume. Farmers have been trying to keep them away but the Wallaby is very determined when it comes to getting the food it needs.

Mating can occur about 1 year of age for them. It starts in December and can last through February. The gestation period is 1 month and usually only 1 will be born. If the young dies early though it may be possible for a second one to be conceived. When the young are born they will instinctively crawl up the body of the mother to get into her pouch. The young will stay in the pouch of the mother for up to 6 or 7 months.

The mother and offspring form a very strong bond. She may allow the older offspring to remain when she has another. Her body is able to create two types of milk – each can offer the right nutrition for the age of the offspring she is caring for. The average lifespan of a Wallaby in the wild is 9 years. 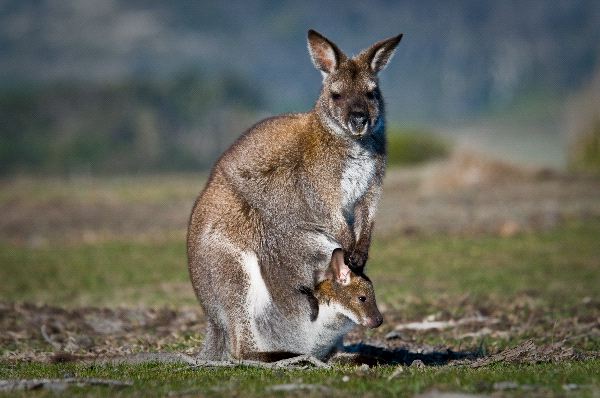