There are 40 species of Triggerfish and they all offer bold colors that are very spectacular. They are attractive and often get attention when people are snorkeling or when people see them in an aquarium setting.

The body of the Triggerfish is very interesting to look at. They are oval in shape and they have a compressed body configuration. The colors include blue, yellow, white, black, and gray. They have detailed designs that often include lines and spots. The color schemes allow them to blend in well with their habitat.

They vary in size based on location but they can be up to 3 feet long. One of the neat elements of their bodies is that their eyes are far back on the head and they can move each of them independent of the other. They have various spiny dorsal fins that are very interesting. When they feel danger around them, one of them moves like a trigger (which is where the name comes from).

They live in saltwater so they are found in oceans around the world. They prefer the tropical and subtropical locations though that provides them with warmer temperatures. The largest number of them are found in the Indo-Pacific waters. They tend to be close to shallow waters and along coral reefs.

They are aggressive type fish and that is interesting to many researchers. They aggressively protect their surroundings and they will battle with each other frequently within their own schools. The survival of the fittest is very dominant with the Triggerfish. They tend to live alone, but often hunt for food in the same locations so they are often seen as a group.

It is common for snorkelers and divers to be bitten by the Triggerfish because they are so territorial. However, such a bite isn’t going to be extremely painful or life threatening. It isn’t believed that the Triggerfish bites people in an effort to consider them as a food source. That is purely a myth.

When a Triggerfish feels they are in danger, the body will move one of the dorsal fins like a trigger. 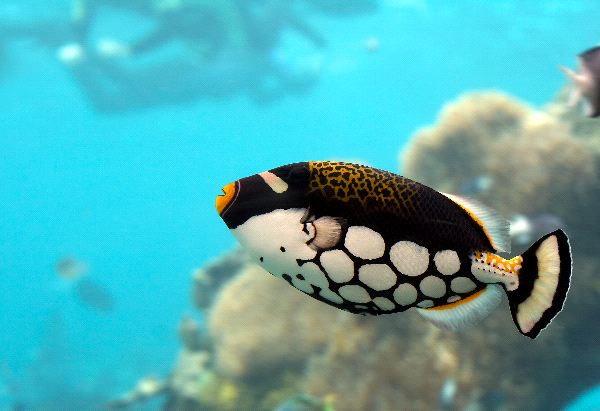 The jaws of the Triggerfish are very powerful and they enable the fish to crush food quickly. They have tiny teeth that are very powerful that help them to consume food. They are bottom dwellers, finding crabs, worms, and other crustaceans such as mollusks from the bottom of the sea floor. They use their fins to remove the debris in their way.

They also shoot water out of the mouth in an effort to remove sand. Then they can dig below the remains to get to their sources of food. They can consume large amounts of food per day and spend many hours seeking food.

During the spawning period, the females will lay large numbers of eggs into secure locations of the water. The males will come along to fertilize them with sperm. There is a very high mortality rate with only a fraction of those eggs remaining in the water long enough for the young to emerge. Even then they aren’t safe though as the young Triggerfish make very good food sources for larger fish. As they get larger in size though the risk of predators diminishes. 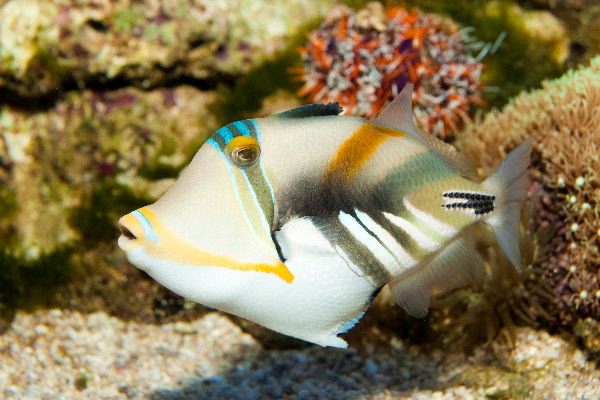