The tiger is one of the most spectacular animals in the world. They are well known for being fast and powerful. There are 9 recognized subspecies, but the White Tiger isn’t one of them and that surprises may people. Experts feel this is a coloration difference and not a true subspecies.

Perhaps what draws people to the tiger is their lovely appearance. These cats have a muscular body with a large head. They have long legs with large paws that also have sharp claws on them. They have powerful jaws and sharp teeth so that they can grab and consume their prey.

They are skilled hunters and use the element of surprise to get close to their prey. They also blend in well to their surroundings so they can move close and then spring into action. The element of surprise is important as a tiger can’t afford to expend large amounts of energy for a hunt and then see their target escape. They are nocturnal which means that they mainly hunt at night. However, they can also hunt during the daylight hours. 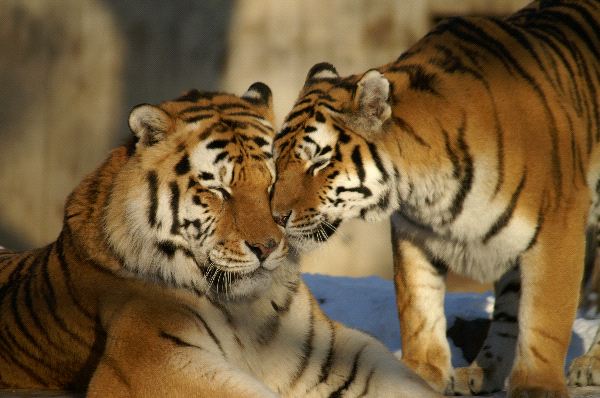 They are meat eaters, known as carnivores. They are able to take down prey that is more several times larger than it is. They are able to use their teeth to dig deep into the neck of the prey so that it dies rapidly. Then they use their other teeth to hold it and to rip apart large portions of the kill. They will eat large amounts of food when they are able to find it. This could be up to 88 pounds of meat!

The size of a tiger can be very different depending on the species. The location where it lives and the diet are also factors. Genetics also play a role in the overall size of an adult. They can be from 100 to 670 pounds and close to 12 feet long. Tigers have a very long tail that can be more than 3 feet long.

No two tigers have coloring, stripes, and patterns that are the same. They also don’t have symmetrical designs on them. This means the appearance on one side of the body can be different from the other side of it for any given tiger.  One of the biggest problems for tigers is the destruction of their natural habitat. This means it is harder for them to find shelter and to find enough food. 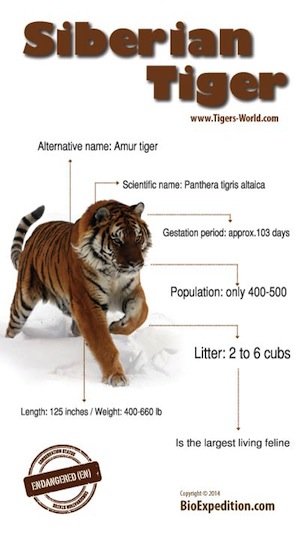 In some locations, this has resulted in tigers attacking humans and livestock. They are moving into the same territory that humans share and that can be difficult. Some ranchers and villages have taken to poisoning or trapping tigers to feel protected as well as to protect their animals.

Tigers need to live in areas that give them access to water. This is because their diet is carnivorous and they have to find food sources that rely on water. If there is no water, they won’t be able to find enough food to survive. They need to have a large kill at least once a week and then several small meals that they can count on. The tiger is unsuccessful most of the time with hunting so they eat all they can when they can.

There isn’t a set mating season for tigers, but November through April seems to be when it is more frequent. The cubs that are conceived will arrive in about 16 weeks. After mating, the couple go their separate ways. The female has the responsibility of creating a den where the young can be born and to be safe. They will remain in the den for many weeks with her before they come out to the world. During that time, they will consume milk from her body. She will have to leave them alone when she has to hunt for her own nourishment.

Even though she will do all she can to protect the young, the mortality rate is very high. More than 50% of them will die before they are 2 years of age. This makes it hard to get numbers to increase in the wild. The average age for tigers in the wild that do survive to adulthood is about 8 to 10 years. In captivity it is about 16 to 18 years.

The tiger is one animal that is in grave danger of extinction. While there are conservation efforts in place, there are huge barriers. The loss of habitat as well as people misinterpreting them as killing machines are hard to overcome. They don’t have a large genetic pool remaining and that creates some concerns for overall health. Many of the conservation efforts in place focus on breeding in captivity. Sadly, many species of the tiger are already extinct but it is hopeful that the remaining species won’t end up that way.