The Tiger Salamander has a very interesting life and style. They are very fast and they aren’t often seen during the day. They are the largest land salamander on Earth with an size between 7 and14 incheslong. They belong to a category of living creatures called amphibians. They are often mistaken for snakes when people just get a glimpse of them due to them being very low to the ground.

They are often called the Water Dog early on because they start life out in the water. They sometimes are called the Mud Puppy and that is when they are still in the larvae stage. This is one of the oldest types of amphibians and many experts believe that the Tiger Salamander has gone through very few changes over millions of years.

They have various markings including vertical stripes, which is where their name comes from. They are often brown in color and the stripes are yellow that cover the entire length of the body. They have a green or gray color on the belly that helps them to blend into the water well from the underside of it.

They have sturdy legs, a very long tail, and a long snout. Even though they are long they are faster than many other amphibians. This helps them to get into a safe location from predators when they need to. They can easily fit into tiny burrows and crevices between rocks.

You will find the Tiger Salamander living throughout North America. They like the hot dry areas including New Mexico, Arizona, Nevada and eastern Mexico. Also lives in Canada. They tend to burrow deeply under the ground around areas that offer water from a lake or a stream. However, they can also survive in the arid climates – something that other types of salamanders don’t. 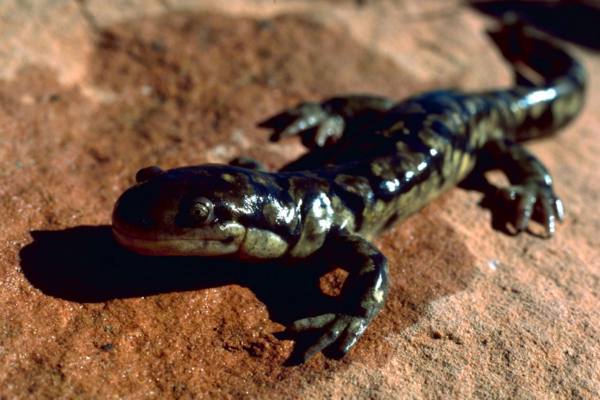 They will hibernate for the winter and then emerge again in the spring. The temperatures are going to affect the time of year when they hibernate and when they are active again. They tend to live solitary other than when they are moving for mating.

The males are very aggressive when it comes to mating. Sometimes males will imitate females so that they can get closer to the females without other males knowing about it. This is a way for those that aren’t strong enough to take on the mature males to be able to have a chance to mate. Sometimes it will work but often the females will avoid mating with such males.

Worms, insects, frogs, and even other salamanders are part of the diet for them. They tend to eat at night when it is cooler. They are very aggressive when it comes to hunting. They are fast and they are calculated so they almost always get their prey. When they are in a larvae stage, they will eat very small fish such as minnows.

During the time of year for mating, the Tiger Salamanders will move in large numbers to a mating ground. The males can become very aggressive with each other for the right to mate with the females. The females will deposit eggs in many areas and then the males will come deposit their sperm. The eggs will become larvae before they morph into regular creatures. Some of the larvae will eat other larvae to become larger and stronger.

The young have gills and look like small fish when they are born. As they get older those gills will diminish and they will spend more time on land than in the water. The Tiger Salamander can live up to 15 years in the wild. 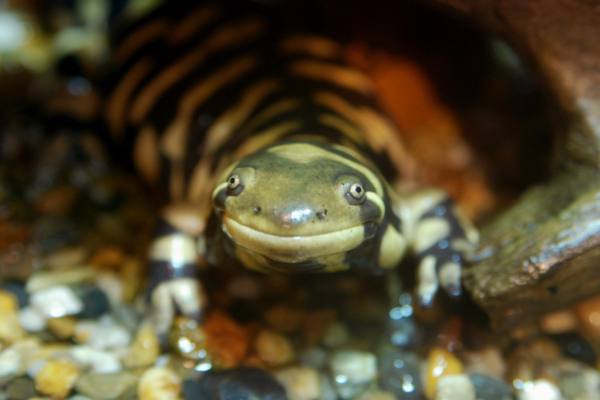