Tigers have the ability to mate any time of the year. However, there seems to be a peak period that runs from November through April. A female will go through periods where she is receptive for a couple of days, and a pair will mate several times during that window of time.  This is typically every 3 to 9 weeks.

Females are ready for mating between 3 and 4 years of age. For the males, it is about 4 to 5 years of age. Females will give off a powerful odor when in estrus, and she will mark around her home range with that scent. This will attract males and let them know she is ready for mating to occur. When a male does find a female, they will spend time with various mating rituals. They will circle each other and they will make vocal sounds to find each other.

The body of the female doesn’t change much until the last 10 or 12 days before the young are born. The young cubs will be born about 14 weeks after conception. The female will create a den where she can give birth to them without they being at risk of predators out there. They are about 2.2 pounds when they are born, and there can be up to 4 cubs per litter.

The young will have to compete even when young with each other and one of the litter is going to be dominant. They will stay in the den with their mother until they are about 8 weeks old. Even though their eyes open up after a week or so, they can’t really see well for a couple of weeks. 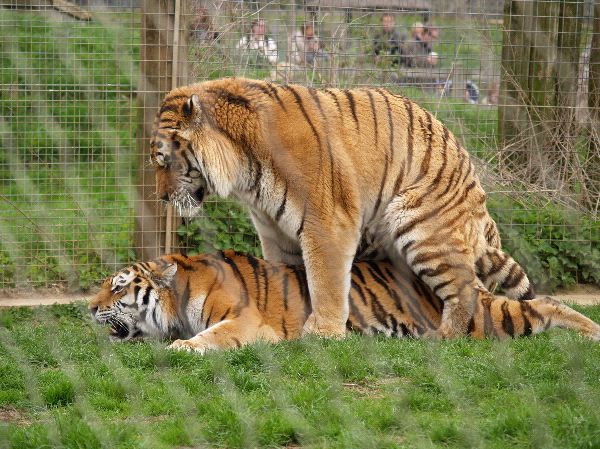 The young will spend lots of time playing and socializing with each other. They will learn how to fight and how to hunt during these play activities. They will learn to hunt with their mother and by the time they are 1 ½ years of age they venture out on their own. Tigers are solitary other than when mating or when raising young.

The young will remain in the den for about 8 weeks. However, their mother will have to leave them so she can eat and drink. She won’t venture far though and she is going to come back to check on them often. If she feels they are in danger of being discovered, she will relocate them. She has to eat 1 ½ times what she did before in order to produce enough milk to care for the young or they will starve.

By the time they are 6 months old, the cubs are hunting and they no longer get milk from their mother. They are starting to have a bit more freedom too when it comes to roaming around and exploring their environment.

Even though the females bond well with the young, it is a harsh life out there. The mortality rate is very high for them. As they get older, they have a better chance of ultimate survival. More than half of the cubs though won’t live to be 2 years of age. Sometimes, males will come along and try to kill them in the efforts to get the female to mate again. She won’t mate when she has cubs to care for.

A problem with the low number of tigers in the wild is that the genetics are weakened. Many of the breeding programs in captivity have been designed to help boost it and to help prevent inbreeding which can result in more birth defects and overall health problems for the offspring. The idea is to strengthen the genetics for future generations of tigers to benefit from.