The Three-Toed Sloth is a mammal and there are four species that have been identified. They are very slow moving animals but they are more aggressive and able to protect themselves. They are very good swimmers and move faster in the water than they do in the trees or on land.

The greenish coloring on the Three-Toed Sloth comes from the algae that derive from the trees. It is really a light brown or light black color. They have very sharp claws designed for climbing and hanging. They are about 18-23 incheslong, and weigh from 8 to10 poundswhen fully mature. They have three claws on each of their feet that are from the three toes on them. They are able to turn their head up to 270 degrees due to an additional vertebrate in their neck.

The Three-Toed Sloth lives in South and Central America. They mainly live in the trees but they are going to be seen on land from time to time. They also are found near bodies of water so that they can swim. However, the majority of the life is spent in the trees. They have to live in the warmer climates as they have a tough time regulating their own body temperature.

It is common to see the Three-Toed Sloth hanging upside down on the lower limbs of the trees. Sometimes they do move up to the canopy area for safety and food. They tend to be solitary animals, only with others for mating or when females are caring for their young. They can be very territorial too.

They use too much energy to move around on land due to the lack of strength in their hind legs. They have to use their claws on the front to pull them along. They will use the sharp claws to fight if they need to. They may sleep from 15 to 20 hours per day so there isn’t very much going on with them other than eating and sleeping!

They make low sounds when they are trying to protect habitat and to look for a mate. The majority of communication though is between the mother and her young. Since she only has 1 baby at a time to care for she has plenty of time to lavish it with attention. 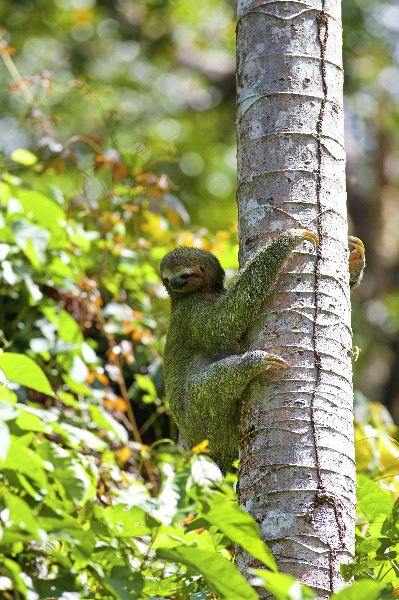 The only teeth that the Three-Toed Sloth are peg shaped. They are herbivores and they consume a variety of food items from the trees. This includes fruits, berries, leaves and shrubs. They eat very slow but they do have to eat lots of food due to the lack of overall nutritional value that their food supplies offer them. They do need water to drink, but most of the time they get more than enough of it just from the food that they consume.

When they are about 9 months old they will have to be dependent on themselves. What is interesting is that they mate and give birth when they are hanging upside down from the trees.

The Three-Toed Sloth is considered to be Endangered at this point in time. The biggest risk to them comes from the loss of habitat. Many forest locations that they call home continue to be destroyed in very large numbers. Conservation efforts are in place to help protect them and to help them increase numbers. 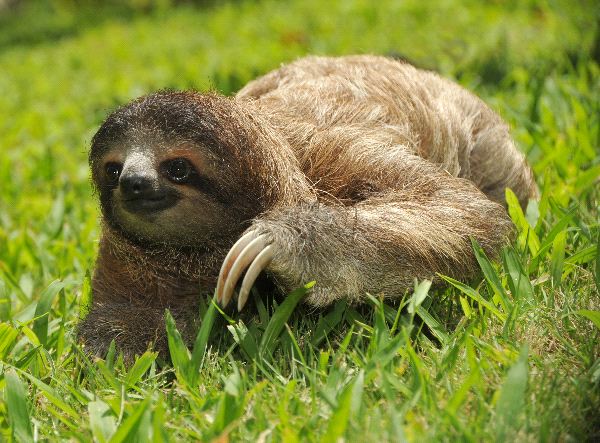