The largest of all penguins in the world is the Emperor Penguin. They tend to get plenty of attention too due to their size. Many people are simply fascinated with the overall appearance of this species of penguin. It seems like they also have the harshest living conditions of all penguins. This was well documented in a film called March of the Penguins.

The males are just a bit larger than the females, but generally not enough to be able to tell their gender only by size. They can be as tall as 48 inches. They can vary significantly in weight based on location and also time of year. They are going to weigh less at the end of the nesting season and molting than before. They can weigh anywhere from 49 to 99 pounds. The head and the bill are small so that the penguins are less likely to lose crucial body heat.

Many experts are amazed that these penguins can live in the freezing cold conditions. They seem to have developed a mechanism in their bodies that allow them to carefully regulate body temperature. It is considered to be very complex and something that most experts still have plenty of questions about. The feathers are very tightly packed too and that helps to ensure that they don’t lose heat. They have additional insulation with that framework than other species of penguins offer.

The Emperor Penguin has black on the head and the side of the body. They also have a white belly with yellow around the breast that is pale. Around the ears they feature patches of bright yellow. The body is streamlined and well designed for movement on land as well as for getting through the water. They are good swimmers and they do well in their particular habitat. They do have sharp claws on the feet that allows them to easily move around on the ice.

Antarctica is home for this particular species of penguin. They are able to thrive in locations that are deemed very harsh. They are able to move with ease on the ice and to live in the frigid water. In fact, there are few other living creatures in this area that are able to thrive. They don’t have problems with humans in these areas due to how isolated and cold they are. Some of the locations where these colonies are identified include Cape Washington, Coulman Island, Victoria Land, Atka Bay, Queen Maud Land, Coats Land, and Halley Bay. There are at least 40 breeding colonies that have been identified. 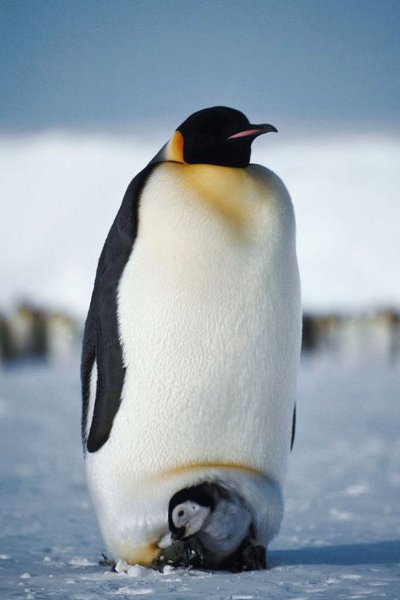 They are able to dive almost 1,800 feet if necessary to find enough food. They are also able to stay under water for a period of time that is almost up to 20 minutes when necessary. It is believed that they are able to be very opportunistic when it comes to finding enough food in their environment. They may travel long distances in order to find enough food. They are very tuned into overall survival skills that will enable them to do so.

These are very active penguins, often looking for food or engaging in socializing. On the ice, they will huddle very closely in large groups. This allows them to get their need for social bonding met. It also helps them to stay as warm as possible.

They have been seen in groups that can include hundreds at a time. They will all be leaning on the penguin next to them. This creates a type of upward wind that allows them to stay warm. They also have a unique pattern of movement that allows them to move from the inside of the group to the outside so that all get a turn in the best positions.

Prey isn’t able to escape due to the barbs in the mouth that are spiky and hold them in place. They are also located on the tongue. All food has to be small enough for the penguins to swallow whole. They have to eat an abundance of food so that they will have the storage of fat they need for both molting and the mating process. Otherwise, they won’t be able to survive. Finding enough food is crucial to their survival as well as to the survival of the eggs and young chicks. Small fish and crustaceans make up their diet. 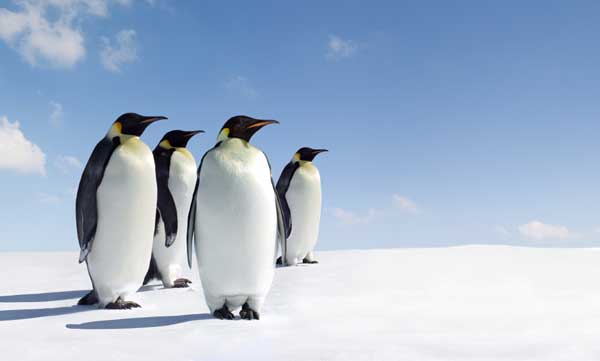 Mating occurs on the stable ice pack locations around the coast, around 3 years of age. However, there have been two small colonies that have been seen mating on land. Experts don’t understand why this has occurred or what it means. It could be a natural evolution for them in order to make due with the best options they have in their environment at that point in time. More research has to be conducted on this subject to find out such details.

There are breeding colonies found all along the ice cliffs and icebergs that offer shelter for the nests from the harsh wind conditions. This is where the majority of the Emperor Penguins will engage in their mating habits. Like other species of penguins, they are going to pair up an stay with that same mate for life. They will find each other through elaborate vocal calls.

The males that haven’t found a mate in previous seasons will put forth a great deal of effort to secure one. They will call out, they will prance with their wings expanded and chest puffed. They know the importance of finding a quality female that will accept them as a mate. When a female is accepting of a male, she will mimic his behaviors. It is believed this process allows them to create a strong bond with each other.

The role of the male is substantial for the survival of the egg. For almost two months he will go without food in order to successfully protect the egg from the harsh elements of the freezing cold temperatures. He may lose as much as 25 pounds during this period of time.

The female will have one egg in either May or June. This takes a huge toll on her body and she will transfer the egg to the male. She will then go to the water for the next two months to feed. Many eggs are destroyed in this complex transfer process. Those that don’t though are the sole responsibility of the male. He will balance it on his feet for about 64 days until it hatches.

The female will return about 10 days after the young chick emerges. She will feed it food that she has in her body. The male will then leave to spend about 24 days to eat. It is the responsibility of both parents to find food for the young chicks. They have been documented covering several miles in order to do so.

These adults have a higher survival rate than most other species. It has to do with the fact that there are so few predators. However, many of the eggs are lost during the harsh winter in spite of the parents doing all they can to offer enough protection. There is a low survival rate for the chicks as only about 19% of them will survive the first year of life. The estimated population is between 400,000 and 450,000.