Territories of Brown Bears in Canada 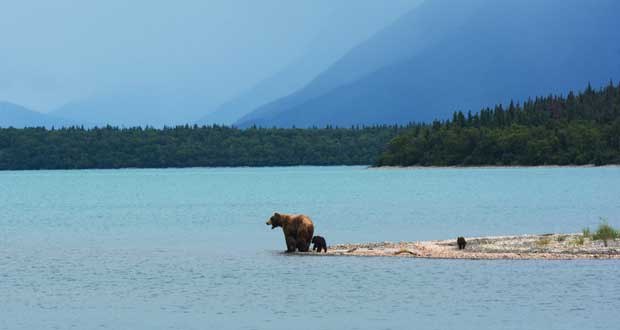 Brown Bears, more commonly known by humans as “those Grizzlies” are natives of the United States, Canada, Alaska, Russia, and northern Europe. In Canada, they are predominantly residents of western Canada, especially near the Canadian Alaskan Border. The term ‘Grizzlies’, used about brown bears is not always correct, for, although all Grizzly bears are correctly categorized as Brown bears, not all brown bears are Grizzlies. Grizzlies are one of the sixteen subspecies of brown bears, and while the most common, are certainly not the only representative of the Brown bear family. Some brown bears aren’t even brown. Examples of cream, black, or even white brown bears have been documented.

Brown bears are not particularly territorial, and though they prefer a mostly solitary existence, they tend not to be aggressive if another bear happens into their territory. However, dominant adult males will often have a ‘personal bubble’ that if violated will result in violent aggression. Violent aggression is also enacted by females bears with cubs, if an adult male comes close enough to endanger them. Since an adult male with kill the cubs to make the female available for mating, she will attack and in most cases kill any intruders into her personal bubble. That being said, in Canada’s wilderness, bears can have territory ranging from nine to eleven, or if there is plenty of space, even fifty square miles of territory per one bear, and it is easy for mild infringement on the outskirts to be ignored. These territories, as they are often referred to, are not property to the bears, instead, these expanses of land are the way humans describe a bear’s usual foraging and hunting grounds. Except for the personal bubble, it is not claimed.

Bear territory varies according to a large number of factors, including food availability, good hunting grounds, water sources, and available mates. Bears are surprisingly vegetarian, with up to ninety percent of their diet made up of berries, roots, seeds, and other plants. The meats that they eat, especially salmon and the other types of fish that occupy most of their carnivorous diet, compose only ten percent of their diet. Although it is not the main component of their food, bears eat from a large selection of meat. They so hunt some for land animals, but they prefer taking kills that wolfs or cougars have made.

Sometimes a fight will break out over the kill, but normally no blood will be shed and the two species will share the kill. This temporary sharing of home range occurred commonly for any case where there is an abundance of food available. When there is a large cache of food available, especially fish, it is not unusual for the normally solitary bears to gather together to make full use of a rich hunting ground.

Mating for Brown bears is a very short ordeal and after mating, the two bears separate to find another to copulate with. The cubs are raised only by the mother and, as mentioned before, an adult dominant male will kill the cubs so he can have the female. Mating occurs when the two bears come across each other and aside from the mating, they do not cohabitate. A female will share territory with her cubs as long as they are under her protection, but once they grow up they are on their own.

Brown bears are naturally very shy of humans, and unlike black bears, who can live in semi human-populated areas, they will stay far away from human civilization. Tragically, there are exceptions, and if humans leave some sort of food source, such as garbage, or bait, a bear will lose his shyness and come to see the humans as a food source. This usually ends up in the bear’s death since he usually ends up attacking the humans looking for more food, and the humans defend themselves by putting him down.

Aside from having a home range territory that contains most of their wanderings, Brown bears are nomadic, and are not too attached to any specific place, unless it had good food! Then all bets are off. Yum!