The Tasmanian Devil is most well known from the cartoon character Taz, from Looney Tunes. They are marsupials that are very fast and they can be very aggressive. They aren’t often seen out in the open. Some people have come into contact with them in the water though as they are excellent swimmers.

The body of the Tasmanian Devil is very bulky and stocky. They have thick fur on the body and sharp teeth. They are believed to have the strongest bite compared to body mass of any mammal in the world. The fur is dark brown or black and they have an area of white that goes lengthwise underneath the neck. They have a long snout with a round black nose and long whiskers. They also have ears that are pointed like those of a canine.

They can give off a very powerful odor that is unpleasant for humans. This helps them to protect their environment. They are very solitary animals and they will spend most of their life alone except when they are mating or caring for their young. Sometimes they will be seen hunting or feeding in areas of others but they don’t live with each other.

They offer a vocalization that is very loud and sounds like a screech. It is a sound that is considered very unnerving to those that have heard it. This vocalization is also a warning that they don’t want anything coming into their territory. Only the young ones will climb trees. As they get heavier it becomes harder to do so. While they are young this can help them to stay away from various predators. 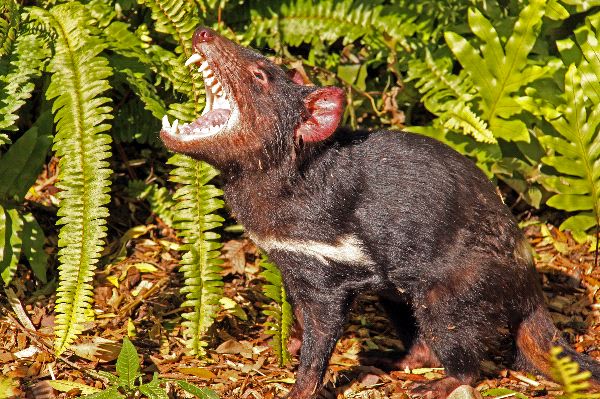 The Tasmanian Devil is carnivore and they are very aggressive with their hunting efforts. They are nocturnal so they go out hunting at night. They have good vision, hearing, and sense of smell that aid them with finding food. In some locations they have been found living close to roads. Then they will snatch up items that have been run over by vehicles. Carrion offers them food without hunting.

They can consume prey that is twice their size but they tend to go for smaller animals that are easy to catch. The main food they hunt for is Wombats. They will also consume domestic sheep that are small. Frogs, reptiles, fish, and even fruit are all part of their overall diet.

Mating can occur about 2 years of age for the females and 3 years of age for the males. Mating occurs from March through May. The males can be very aggressive to show dominance so that a female will mate with them over another. The male will often stick around to make sure the female doesn’t mate with another male after him. However, he will often mate with several females. The young are born about 21 days after mating occurs. The size of the litter can vary from 2 to 4.

Right now they are considered to be Endangered. The number of them in the wild continues to dwindle. They are often hunted for sport and for their meat. However, the efforts to protect them haven’t been well enforced and poaching continues to be a serious threat to their survival. 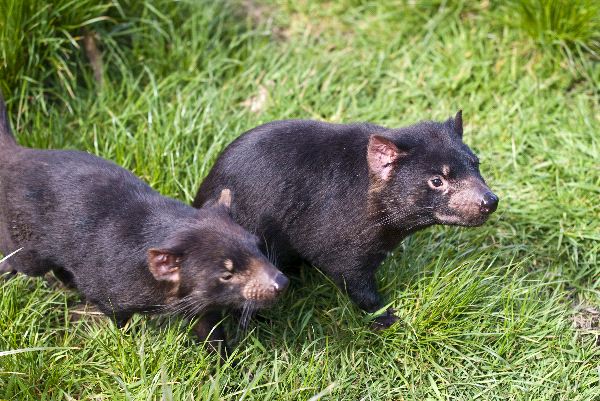