The Taimen is also known as the Siberian Salmon. This particular fish is one that is well known. It is the largest salmon species. The sizes can vary though based on location. Some of them weigh over230 pounds. They can grow to a length of7 feet.

The Taimen will vary in color based on their location. Their colors help them to be able to blend into the surroundings. The belly is usually white but it may be a dark shade of gray. The body is reddish and so are the fins. The head is olive green to help them blend well to the surroundings.

It is found through the Volga River and the Pechora River. They are found in parts of the Arctic and Caspian drainages as well. They can be found in Mongolia and Russia. They will only thrive in water that is constantly flowing. It is very rare that you will find the Taimen living in a lake because the water doesn’t move fast enough.

They do have routes that they will travel during spawning seasons. They can have a home range that is very widespread in order to help them find food. It depends on the competition for the habitat.

The Taimen may be found living alone or as part of a pack. They may use the security of numbers to help them stay safe from larger predators. From time to time they are seen hunting as a pack too, but most of the time they will hunt for their food on an individual basis. Due to their habits in this manner, they are sometimes referred to as River Wolves. 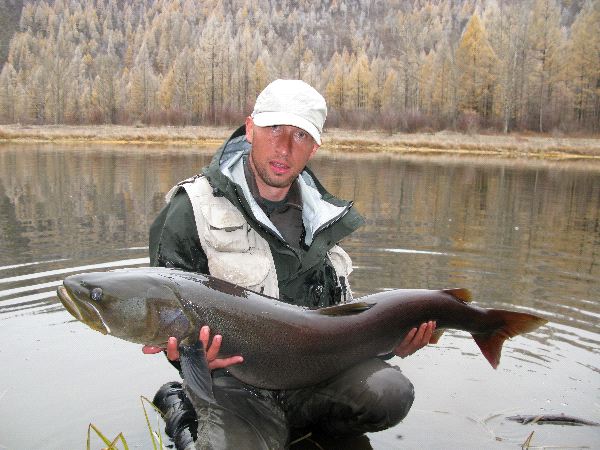 A variety of other fish make up the majority of the diet for the Taimen. They will also consume birds and rodents though that they can find in the water. They are opportunistic so they will feed heavily when food is available. They will eat just about any types of fish so they do well in various habitats. When there isn’t enough food they have been known to eat their own kind.

Sometimes the Taimen is greedy when it comes to the size of the prey that they consume. Some of them are found dead with the remains of other fish or prey in their mouths. It was simply too big to swallow but they couldn’t spit it back out. As a result, the Taimen suffocated.

The Taimen has a very slow rate of reproduction. This process takes place during the spawning period. The males and females will meet up there and after mating the females will find a place under the gravel in the water where they can place their eggs. Only a small number of eggs will be able to survive long enough to hatch.

Even those that do hatch will be vulnerable to predators in the water. The larger a Taimen becomes though the less risk it has of becoming a food source for predators. In the wild they are known to live up to 50 years.

In some locations the dwindling population has become a concern. The capture of the Taimen in order to offer delicious tasting salmon is common. In some regions though there is only a catch and release program in place. This means people can fish for the Taimen but they can’t keep them. They also have to use certain types of hooks so that they won’t be damaging the fish. Their status at this point in time is considered to be threatened.