The smallest bear species in the world is known as the Sun Bear. A full grown male may tip the scales at barely 66-154 pounds while females are even smaller, ranging 44-88 pounds.

Sun Bears have dark black or brown-black fur with a orange-yellow horseshoe shape in the chest characteristic of this species. They fur is short and sleek to adapt to the hot temperatures of the lowland it inhabits.

The Sun Bear has an extremely long tongue compared with its size which ranges from 8 to 10 inches in length and uses to extract honey or reach insects.

This particular species of bear loves the warmer climates. They are found in the tropical rainforest areas where the temperatures are from 78 to 82 degrees Fahrenheit all year long. In these areas there is lots of annual rainfall too.

Some of the regions where the Sun Bear lives include Cambodia, Malaysia, Burma, and Bangladesh, reaching some parts of northeast India. Small numbers of them also live in Vietnam, Borneo and China. Their habitat ranges has been drastically reduced due to the destruction of the forest areas.

Many people refer to the Sun Bear as the Honey Bear. This is due to the vast amount of it that they will consume. They are good at climbing trees to get to the honey, and will spend lots of time there.

Their name comes from the sun colored shape in the chest and eyes. They love to soak up the rays that come from the sunlight, but they are very active at night though. This is when they do most of their eating and exploring.

Sun Bear do not hibernate though as the temperatures are warm enough for them to find food all year long. 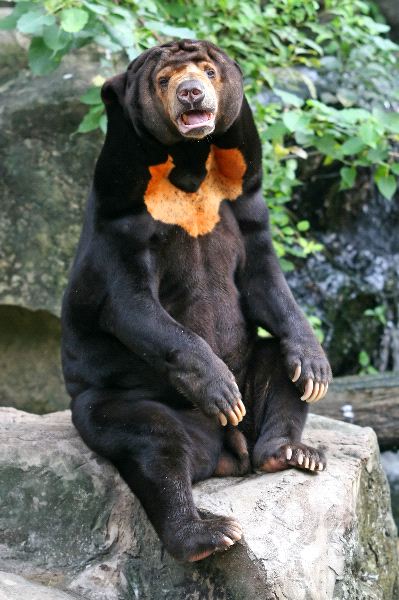 In the particular area where the Sun Bears live, they are able to consume fruits and nuts all year long. These items make up a very large part of their diet. However, they are willing to eat just about anything that comes along. Some other dietary items include lizards, rodents, and eggs.

Sun Bears love honey and they will consume very large amounts of it whenever they can. However, it is believed that they consume this honey in addition to their regular diet instead of as a way to replace certain things. They will stick their long tongues into the beehive and consume it even if doing so is creating made bees around them.

For the Sun Bear, reproduction can occur at any time of the year as they do not hibernate. The cubs are often born in a well hidden part of the forest for their own protection. It is common for two at a time to be born. They will be cared for by their mother until about a year and a half of age before going on their own. During that period of time they will learn how to climb trees and to find food.

The male stays with the female after conception and helps to find food for her as well as a place for the young to be born. In most instances he will also help with caring for the young. When they leave to make their own lives, the adult male and female may mate again with each other or go their separate ways.

Adult Sun Bears have few predators besides humans. Tigers, Pythons and Asian Leopards are the few threats they have. Occasionally Asian Black Bears are also a danger. 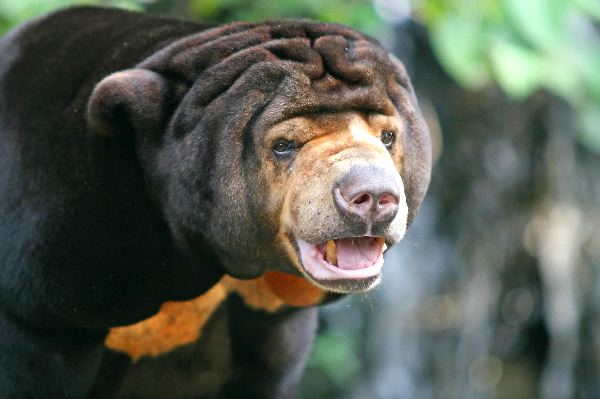 The decline in Sun Bear population is due to the lack protection to their natural habitat. Logging efforts continue to decrease the range that they have to look for shelter and for food.

The greatest danger against its survival is the use of their bile for Chinese medicine.

In many areas where the Sun Bears live it is very poor economically. It is common for villagers to hunt them to feed their families. They also will capture them to sell to various entities and even to individuals as pets. Villagers are also known to get paid for guided hunts when a group of hunters is after the trophy of a Sun Bear.