The only remaining members of the Sunda Island Tigers is the Sumatran Tiger. The two others that once lived here – Bali Tigers and Javan Tigers – are both extinct. It is believed this population comes from the mainland populations based on the genetic DNA that has been profiled from them.

This particular tiger has a coat that is darker in color than others, so it is a bright orange coloring. They also have stripes that are black and very thick. At the end of the stripes there are spots and lines with small specks between them. They also tend to have a larger number of stripes than other subspecies of tigers.

This is considered to be one of the smaller tigers out there. The males can weigh from 220 to 310 pounds. The females are smaller with an average weight of 170 to 240 pounds. Another way to tell the males from the females is that they have a beard and mane appearance on the face with hair on both the cheeks and the neck.

The Sumatran Tiger  is found around the Indonesian Island called Sumatra. This is a WWF (World Wildlife Federation) Priority Region which has plenty of protective measures in place for these tigers. However, only about 1/3 of the area is well protected when you consider the overall habitat for the Sumatran Tigers. They tend to live in a variety of habitats including the lowland forests, swamp locations, and around forests with freshwater resources.

Due to the small number of Sumatra Tigers and their isolated locations, it is very hard to successfully identify their behaviors. It is believed that they are more aggressive due to the limited habitat. They not only have to fight with other tigers for food and resources, but they often come into areas where humans and livestock have been established. 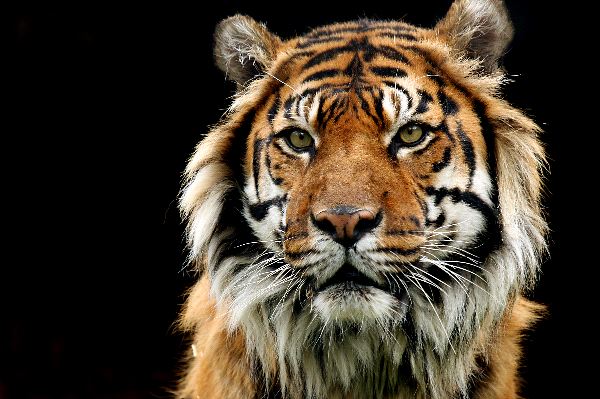 Most of the time, the Sumatran Tiger is going to hunt for larger types of prey. Depending on the location they may find deer, tapir, and wild pigs. When necessary they will also hunt for small food sources such as monkeys, fish, and birds. They have also been known to dine on rodents when they can’t find larger sources of food.

Like other tigers, they are very good hunters. Their coloring allows them to blend in well to their surroundings. Then they are able to pounce on the prey and take it down with very sharp teeth. They are able to take down large prey that is several times bigger than they are. They can consume enormous amounts of meat from a kill. They are good hunters but only about 1 in 20 attempts is a successful kill for them.

Mating can occur at any time of the year for the Sumatran Tigers, but November to April seems to be the most common. When there is a lack of food though there is less mating taking place. The females give off strong odors while in estrus that will attract males. They may call to each other until the male finds the female and mates with her several times over a period of a few days.

The females often don’t even look pregnant until the very last days of the pregnancy. Then they will create a den where they can keep the young cubs safe for about 8 weeks. The cubs are very small and they are born blind. The mother has to leave them alone to go feed so that she can produce milk for them to consume. There can be up to 6 young born but there are often only two or three per litter. 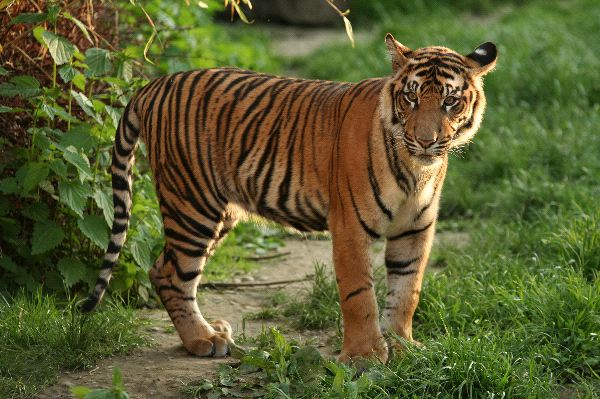 This tiger subspecies is classified as being critically endangered by the IUCN. As of 2008 the known population was from 441 to 679. There are several locations of subpopulations out there but most of them have less than 50 members and they are on the decline. Even though some of the locations where this tiger lives is well protected, issues with logging around the rest of the habitat continues to be a big challenge.

Today, the largest populations of the Sumatran Tigers live in the Gunung Leuser National Park and the Kerinci Seblat National Park. It is believed that at least 100 of them in an unprotected area will be killed in 2012 for agricultural elements to be put in those regions. These tigers are very vulnerable to issues with poachers. They are hunted for sport and for their meat. It is also known that their bones are sold to make medicines from. Many villagers are in fear of these tigers so they hunt them for their own safety.

One of the threats to these tigers also stems from too closely breeding with ancestors. Due to the small amount of them found in any given area, the genetic pool is very weak. This increases the risk of birth defects and increases overall mortality rates of the young.