The Sumatran orangutan is a genetically similar offshoot of the Bornean orangutan, though the Sumatran variety is much rarer and threatened by extinction. They are only found in the Sumatran Islands in Indonesia, and even there, the species is becoming a less and less common marvel, and more a rare sight to behold. This variety of orangutan was the third species of hominid to have its genome mapped to the fullest extent of our technology, and has given us deep insights into the structure of our own species. It is speculated that the Sumatran and Bornean orangutan lineages split about four hundred thousand years ago.

Very similar to its Bornean cousin, the Sumatran orangutan has orange, bristly fur that coats most of its body. The primate has the opposable thumbs to allow for basic tool manipulation. Unlike its cousin, the Sumatran is much more of a thin creature in stature, but it reaches the same weight at about 100 to 200 pounds. This orangutan is usually about four feet tall when standing. They have longer faces, and build than their Bornean counterparts, but can appear “fatter” in the midsection, but this is largely due to the way the creature reclines.

As their name state, the Sumatran orangutan is only found on the islands of the Sumatra, in Indonesia. Due to the heavy deforestation there, the population of these primates is diminishing and becoming increasingly centralized. They are native to some subtropical locations and deeply tropical forests. They are largely arboreal, and do not travel on the ground very often, due to the influence of predators, like the Sumatran tiger, that eats stray primates.

More prone to flights of fancy and play than the Borneans, the Sumatran orangutans can enjoy nothing more than to tease a tiger. Some video sequences show an orangutan baiting one of these fierce creatures by swinging over its head a whacking it soundly with a stick as it passed.

Sumatran Orangutans are very inventive and intelligent. They have been observed using broken sticks as spoons to gather insects from crevices, use teamwork to knock down fruits, and even carry large leaves as umbrellas when there is a torrential downpour. They have even been seen collecting honey from bees nests with tools designed specifically for this task. One of the Sumatrans orangutan’s favorite fruit is surrounded by painful spines that lodge in the skin, but this animal has shown effectively to peel the fruit with a tool, keeping itself undamaged. 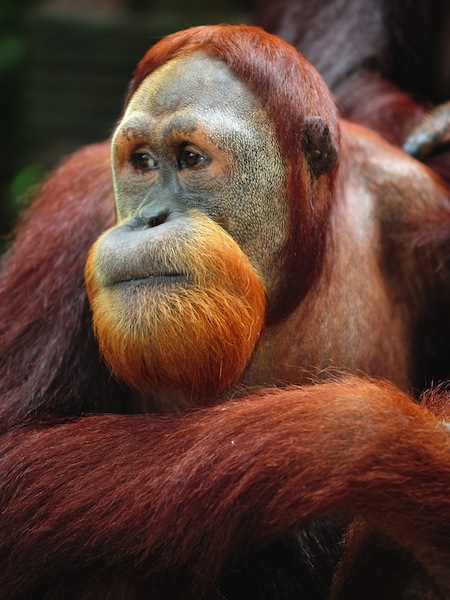 The Sumatran orangutan is an omnivorous creature, but unlike the Bornean, they tend more toward fruits and insects rather than fish and game. Their favorite food is the durian fruit, a spiny fruit that can only be eaten with the use of tools. They are also fond of termites, ants, and most other insects that infest the trees the Sumatran occupies. They are also fond of honey, when it is available, and have been shown to eat the substance alongside other fruits or other snacks.

Unfortunately, with the rapid deforestation issues in that region, the fruits the Sumatran orangutan are used to eating in fairly large amounts and that used to be fairly simply to obtain, are becoming much more scarce. This has lent itself to the orangutan traveling further and further in a day to find its food source, and once it finds such, eating more than it would normally due to the vast amount of calories the creature burned while searching. This leads to more animals growing hungry and less food to go around.

These animals also stockpile figs and other fruits for group meals. The Sumatran orangutans will often collect these meals as groups as well, saving the food until the entire collective can feast on shares equal to dominance.

Mating rights are accorded to the dominance of the individual Sumatran orangutan, and as such, the younger males rarely get matting rights because of their decreased size and the female’s ability to stave off most advances made by the smaller males. The secondary sexual characteristics of the mature male are almost always immediately evident, things like the puffed cheeks and muscles, so a mature female can generally tell a suitable male simply by looking at them.

Unlike most primates, the Sumatran orangutans have a long period of learning, up to nine years, and even after adolescence, they tend to associate regularly with their mother. The weaning period is usually about three years, but can continue for a few years after that. Young males take about ten years to mature, and about another five to fully form the secondary sexual stimuli, while females usually have their first ovulation at about thirteen years.

They live about 45 years in the wild, apparently never reaching a menopausal state, and can live up to fifty five years in a captive state. A mother will have about three to four offsprings in her lifetime. The ovulation cycle of the female Sumatran orangutan is about thirty days, in which time, the female will seek out a matured male. The family groups usually stay closely knit until the child is fully matured and even then the young adult will travel with the group for some time afterwards.

Only about seven thousand Sumatran orangutans still exist in the wild today, putting the species firmly in the critically endangered category. There are distinct zones that have very harsh repercussions for hunting in, but the population continues to dwindle despite these regulations and laws.

The Sumatran orangutans face many of the same dangers their cousins, the Borneans, have to deal with. The largest of which is the continued poaching for the bushmeat trade, which claims hundreds of lives every year. These locations have very stringent anti-hunting laws, but the rarity and price that some people are willing to pay for the meat still leads some to take the life or death risk.

Deforestation is also a big concern to these orangutans, where the was once a glut of food to scavenge, there are now only scraps. While industrialization is not as big of a factor in these regions, natural desertification has begun to shrink the arboreal habitats of these creatures.

The pet and zoo trade on these animals is also at a huge premium, often claiming the lives of mothers and other familial units of the children primates.

Fortunately, the Sumatran does well under the care of humans, and many conservation acts have begun to surface. Many fantastic rehabilitation centers have cropped up in the last ten years, reintegrating children who have lost parents back into the primate’s society. There are also huge tracts of government land labeled as habitats for these creatures, where humans fight a bloody war against poachers of all kinds, to protect this wonderful animal’s continued existence.

The best thing that an average citizen can do for the Sumatran orangutan is to spread the word of the threats it faces as the population continues to shrink.