The Striped Skunk is the one that people are the most familiar with. It is black in color with white stripes down the back of the body and down the tail. It is even small but there in white on the very top of the head. They can vary in size based on location.

Some of them are only about7 pounds but others are up to14 pounds. The average weight is about8 pounds. The length is about 13 to18 inches with the tail adding another 7 to15 inches to them. The males are usually about 10% larger than the females.

The body of the Striped Skunk is round and has long fur on it. They also have as small face with a pointed nose. The tails is very long and bushy. They are very low to the ground and have small legs. The scent glands are what allows the Skunk to be able to emit a very horrific smell. They will lift the tail and spray when they feel that there is any type of danger around them.

Mexico, the United States, and Canada are the most common locations where you will find the Striped Skunk. They live in a wide variety of habitats including agricultural areas, grasslands, and woodlands. They will move into new locations as their habitat is dispersing. They have had plenty of run ins with people due to homes being built so close to their natural habitat.

Both animals and people have learned to stay away from the Striped Skunk if they don’t want to be sprayed. Due to the fact that this animal often lives in close proximity to people their pets are often sprayed by them as well. During mating the males are more aggressive so they may be ready to release odors readily. The females are more likely to do so when they have young to protect.

They are mainly seen out at night. During the day they will sleep in cool dens. The males will live alone but it isn’t uncommon for several females to share one den. 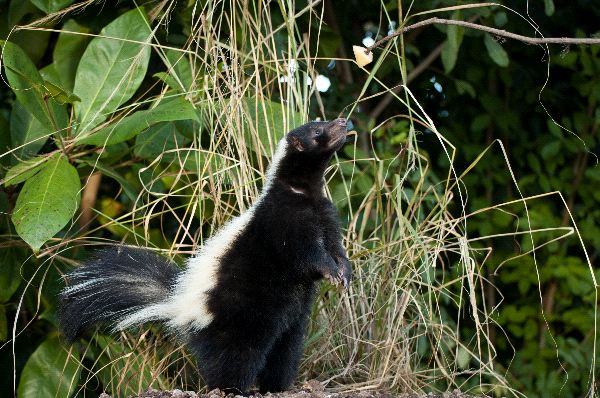 They are omnivores and have a variety of items that they enjoy eating. They include beetles, crickets, grasshoppers, snails, ants, wasps, frogs, rodents, bird eggs, grains, corn, nuts, and fruit. They are opportunistic so they are going to eat anything that they can find in their given location to be able to do well with in terms of overall survival.

They can be a problem around camp grounds and homes because they will rummage through the garbage. They will also consume pet foods that may be left outside. They can be tough on lawns too because they will dig to get to worms and leave large areas of the landscaping damaged.

Mating occurs for the Striped Skunk from February to April. The males will go outside of their territory to find as many females to mate with as possible. The females will only mate with one male per season. Males can become very aggressive with each other in their quest to be able to mate with a female. The male grasps the female by the nape and then mounts and copulates with her.

The females will create safe locations in the den for their young to be born. She may have from 4 to 8 per litter. They can’t do much for the first 3 weeks until their eyes open but their ability to release scent is there when they are just a few days old. The mother will nurse them for 8 weeks and then teach them how to hunt. 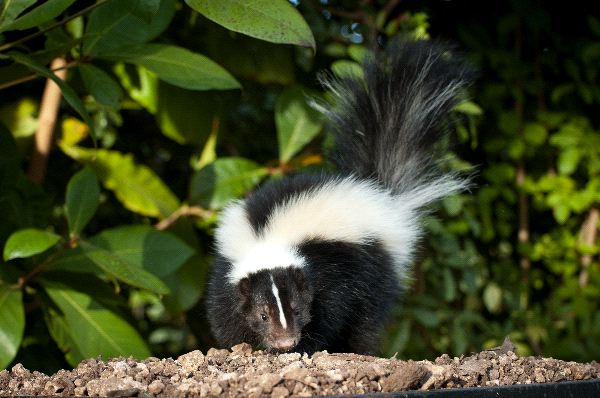