The Spotted Skunk has various areas of white on the body that mix with the black. They don’t feature the famous white stripe that goes down the middle of the back. The spots can be varied through the four species and even by individuals.

The coloration scheme isn’t the only difference for the Spotted Skunk. They have a body that seems very similar in style to that of the weasel. They have short feet and they are very slow moving. They have scent glands that enable them to release powerful scents that are very strong and foul. This is able to help them to defend themselves from predators.

They can spray people or other animals up to 15 feet from them. They have very good hearing but very poor vision. They often spray when they feel that there could be some type of risk around them. This is why they sometimes spray humans or even domestic pets. They can’t differentiate them from predators.

The woodland regions around North America are home for the Spotted Skunk. They are also found around the Continental Divide, British Columbia, and Central America. They are also found in some locations of Mexico. They tend to do well any place that offers them enough food. They will create dens from rocks, trees, use what has been abandoned, and even get into garages and other structures.

They are nocturnal, coming out at dusk to look for food. They will spend the daylight hours in a den that they have built and sleep where it is cool. Males will live alone but it is common to find several females in one. They won’t do so though when they have young to care for.

They often fight over food and location, but they don’t spray each other with their oils. Instead, they will bite and scratch until one of them runs away from the battle. Many people worry about being bitten by a Spotted Skunk due to the risk of rabies. It is possible so any human or any pet that gets bit should be tested. 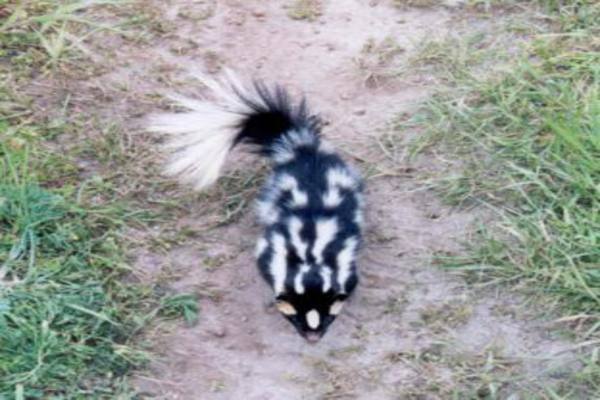 They consume a variety of foods and are classified as being omnivores. They consume plants, berries, nuts, fruits, rodents, frogs, snakes, small lizards, and bird eggs. They will consume all that they can to be able to store up fat for the winter months.

The males will go looking for harems of females that are living together. He will try to mate with all of them. He will have competition though from other males that want to have that right with those females. Only one male can mate per female though so the stronger and more aggressive one will win.

The females won’t mate again until the following year. However, the males will go on a quest to find as many females as possible during the mating season. He will be very skinny and tired by the time that is over because he will rarely even stop to eat.

The females will create a den that is only theirs when they are carrying young. They will give birth to a litter ranging from 2 to 10 of them each year. They will be weaned when they are about 8 weeks old but around 4 weeks they will be going out with their mother to find food. They are full grown at about 4 months and have to leave her den to create their own.

They have a very short lifespan in the wild of 1 or 2 years. In captivity though they can live up to 6 years. In some states they are kept as pets.