The Spinner Dolphin is one that is very interesting, and there is no doubt people love it for all it does. They are known to create great shows in the wild and in captivity due to the spinning, flipping, and jumping that they take part in. In Asia there has been a dwarf subspecies identified.

This particular dolphin species is slender and it is also smaller than many of the others. They vary in size though depending on location. The males are larger than the females and they also have a postanal bump that is very distinctive. They can weigh from 130 to 170 pounds and they can range in length from 6 to 7 feet. The head is very small too.

They are light gray on the sides with a darker gray on the back. They are also going to feature light gray and white on the belly. There can be dark stripes that run from the flipper to the eye. The beak is very long as well as thin. The dorsal fin is shaped like a triangle.

The tend to live in the tropical regions of the seas, but they also live further from shore than most dolphin species. They live in the Indian, Atlantic, and Pacific Oceans and they can be found in the shallow waters on occasion to look for food. They seem to get closer to the shore in Hawaii than in any other areas. This is a common tourist attraction in Hawaii because they are close enough to see. During the day, they may go to the bay to rest. 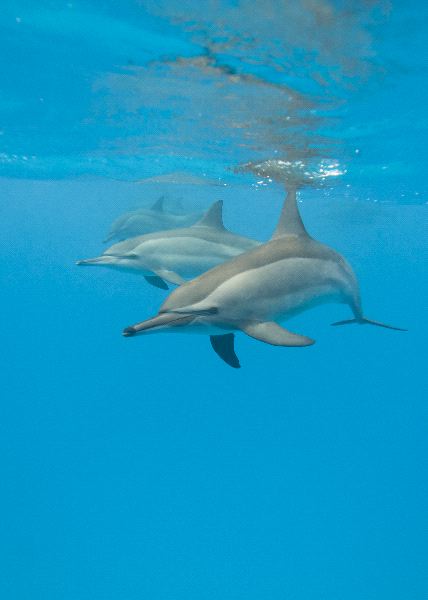 As the name indicates, spinning is a big part of what their behaviors include. The Spinner Dolphin is also famous for riding bow waves which are created in the water when boats go by. They often live in larger pods with the numbers from 100 to 1,000 in them. There are several subgroups though in each pod that add to the overall complexities of their hierarchy. There is plenty of dominance in place with core members.

Spinner Dolphins are very social and they interact often within their pods. They also interact with other types of dolphins. They use echolocation often and thy are also known to touch each other more often than other dolphin species. They create bonds that are very intense with their pods. If you would like to see them leaping, jumping, and spinning, such activity is most likely to occur at night.

The day time is often for them to rest. They may do so at the various inlets they can find. They come back to those same locations daily as long as they feel safe there. As the sun starts to go down though they become very active. They are going to migrate as needed in order to be in warm waters and to find enough food.

They mainly feed on squid but they will also consume shrimp and many species of fish. The feeding tends to mostly be done at night. That is when the squid will rise to the top of the water. If the Spinner Dolphins are seen feeding during the day, it can indicate that there isn’t enough food in that location for them. They are able to dive about 984 feet in order to find food.

Females may be ready to mate when they are 4 to 7 years of age. For the males, it is later on with the average from 7 to 10 years old. There are plenty of observed courtship elements for them that have been documented. They will be very playful and touching of one they plan to mate with. Mating times of year depend on the location. There are a few times per year in each location though when the hormone levels increase and that is when mating will take place.

After a pair successfully mate, it will be about 10 months before the young calf is born. They will be born fluke first and the females of the pod are very protective of it and the new mother. They will drink milk from the mother for about 2 years after being born, but they get introduced to solid foods from 4 to 6 months.

The females tend to only mate once every 3 years. However, the young may stay within the pod for life, and the bond between them and the mother remain strong. They can live an average of 20 years in the wild. 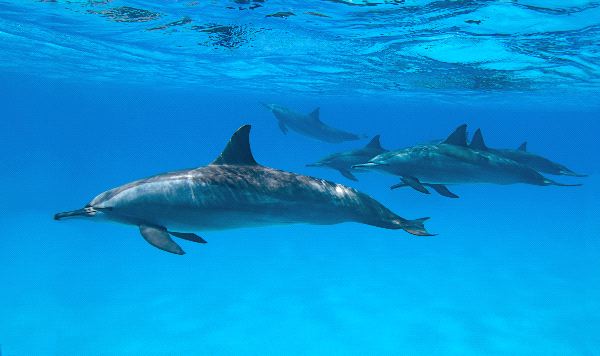 The Spinner Dolphin is classified as being endangered. One of the biggest problems for them is pollution in the water where they live. This can cause damage to their skin and if they consume plastic or chemicals it can cause internal damages. The use of commercial fishing nets in some regions has caused these dolphins to be injured or killed.

Even with some types of conservation in place, it is hard to do enough for them. Reducing pollution in the water is very expensive and time consuming. Efforts to prevent more pollution though can be useful. Asking fishing entities to change their equipment has also been useful in many locations. The Dolphin Safe program in the USA has also helped to reduce the risk of them being harmed in this manner. Laws against illegal hunting of these dolphins have also been better enforced than in the past.

Spinner Dolphins seem to be very adversely affected by sources of stress in their environment. Noises from boats, from offshore drilling, mining, and hydroelectricity can all prevent them from eating well, mating, and it can harm their hearing. Their patterns of sleep can be harmed due to such noise too. Significant efforts such as limiting the areas for such activities continue to be put into motion. Yet it is hard to balance the advancements of humans with the needs of these dolphins to make it all work out. Without conservation though the numbers of Spinner Dolphins will continue to drop.