Spider monkeys – they are a New World species of monkeys.  They are known to be from the Ateles family; and are a subfamily of Atelinae; though they are one of the very biggest types of monkeys there are available today.  They have a unique name for a monkey but it is because of their limbs and how much they can resemble spider legs at times.

They have black heads and for what is known to be one of the very biggest spider monkeys was one which weighed almost 24 pounds which is a tremendous weight for any primate and this is only for males.  The females are a little lighter because they only weigh from 13 to 21 pounds; they are quite big too though they are not as big as the males but still are quite heavy in size.

The spider monkeys have very long arms and legs which do bring about their name – spider monkeys – and they have prehensile tails.  These tails can reach 35 inches long and can be very flexible.  Though their fingers have little grooves on them which can look very much like human fingerprints; and when these spider monkeys walk, their arms can almost drag along the ground with them as they walk.

Though, they are not going to use their arms as a way to balance themselves when they are walking; this is very much unlike most other primates out there however. They will use their tails instead to help them balance when they are walking; and their hands will be very narrow and long.  They can be almost hook like but they will have reduced thumbs. Their fingers can be curved and elongated.

The spider monkey’s hair is going to be very coarse and their hair can vary in colour.  It can change from brown, black to gold; but their feet will be black.  The faces has a lot of hair and their heads are quite small. The nostrils can be usually found apart from each other which are one of the features which help to make the spider monkey to be unique and distinctive.  Though these animals are very agile and can be seen in the wild to be jumping from one tree to another often.

Though, there are different types of these monkeys, here are some of them;

They are all different from one another because they vary in terms of certain small features.  For example, the Central American spider monkey is going to reach around 14-26 inches in length with its tail adding another 70-86 cm to its overall size.  They will have a small head also with a muzzle; though their fur can be black and reddish and the faces can have unpigmented skin around the muzzle and eye area. The brown headed monkeys will be the same as the Central American’s but their bodies can be around 16-22 inches in length.

The Habitat of the Spider Monkeys

Most spider monkeys can be found in tropical rain forests.  Usually, they will be in the areas of south and Central America but they can live as far north as Mexico.  Though, they do like to keep to the high trees; and they can often use their unique limbs to swing from tree to tree but they are very graceful as to how they can achieve this.  They can grip onto the branches and trees very tightly even though they do not technically have thumbs.  They will spend most of their times in the tree tops and swinging from one tree to another.

The black-handed spider monkey usually will be found near the coastlines of Tamaulipas and Jalisco, Mexico; though they have been known to be found in Columbia.  They do like montane forests and rain forests also.  The brown headed spider monkey is a little different because they will be found in South America and Central America, again they will live in rain forests.  They will spend most of their time trying to forage for food and up in the trees.  Though from each particular group, they can be found in a range of locations usually in south and Central America.

How Do The Monkeys Behave?

Most of the male monkeys are going to leave their groups when they reach their maturity age.  Though, the males like to stick together throughout their lives so that their bonds are strong and will be related mostly. Strangely the males are going to have stronger bonds than the female monkeys which are a little strange as usually it is the other way around.  For females however, their strongest of bonds are going to be between themselves and their young.

The monkeys will usually spend their nights in trees which they select very carefully because they have to ensure they avoid the predators out there.  Though, the groups are usually led by the females of the group and try to plan the feeding routine for each and every day for the group.  Grooming is not going to be as important as social interaction; this is thought to be because they don’t have much of thumbs. 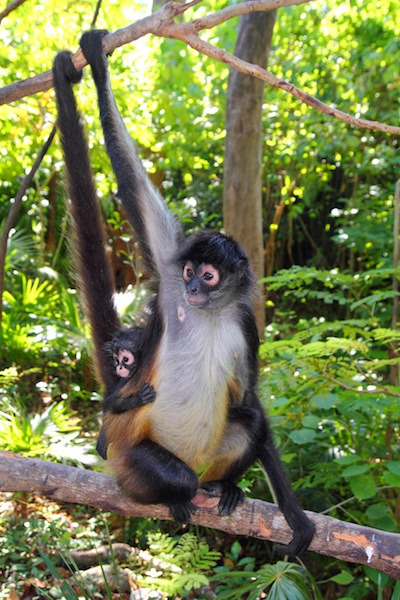 When it comes to the diet of a spider monkey, this is going to be mostly formed of nuts and fruits.  Though they will be able to live for a very long amount of time with only a few pieces of fruit and nuts; and the spider monkeys are going to eat fruits from the bigger forest trees.  They will swallow the fruits whole and that does include the seeds of the fruits.

The Reproductive System of Spider Monkeys

Usually, it will be one young born; this can happen once every 3 through to 4 years.  Though the young monkeys are going to be solely dependent on the mothers for the first 10 weeks of their lives.  Once the 10 week period is over, the young will start to explore things by themselves and will like to play with other young infants also.  Their mothers will be there to help care for them for the 1st year of their lives also.