The Spectacled Bear no doubt has an interesting name. Yet when you look at one you will definitely see where that name comes from. They have rings of color around the eyes that can be white or golden. These make it look like the bears are wearing a pair of glasses when you see them in the daylight. The rest of their fur is dark black. They tend to have fur that is thin compared to other bears, but this is because of the warmer temperatures in that area.

Spectacled Bears are relatively small species, compared to other species of bear. Adult males can range in weigh from 220 to 440 pounds, while females from 77 to 181 pound. Length can range from 120 to 200 cm. The males are larger than the females for about one third. You will also notice that they have long claws, designed to make it easy to climb into tall trees.

Spectacled bears are the only species of bears that live in South America. They have been identified around Venezuela, Columbia, Ecuador, Bolivia and Peru.

They are able to successfully thrive in a variety of conditions here. They include forest areas, desert-scrubs and high-altitude grasslands, however, they mainly look for trees where they build a platform to rest and store food.

These are very shy bears and so it isn’t common that you will see very much of them. In fact, it is believed that they go out of their way to avoid contact with humans. They activity habits are mainly diurnal or mixed diurnal and nocturnal according to the place they live. These bears don’t hibernate as food is available all year long for them to survive. 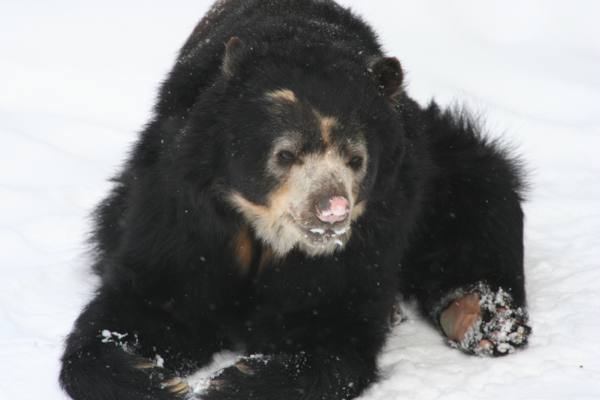 Spectacled Bears are omnivores. They are able to successful chew on tough plants in the wild. Some of these plants include palms, cactus, or the bulbs of orchids. Their diet mainly consists of plant live but they will eat meat from time to time as well.

During certain times of the year when various trees offer fruit, that is what they will feed upon. They can be greedy about it too, sleeping in a given fruit tree so that they can continue to feed on it again after they have rested.

They also feed from honey, sugarcane and corn, being the animal prey quite small part of their diet.

These bears are ready to mate at about four years of age. It isn’t known when they mate or how long the gestation period is. The females will create a nest where she will give birth to her young. The young are born around February which is very different than other bears. However, this is summer like temperatures where they live which makes it work. Mothers are very protecting of their young and their litter size is usually two cubs.

Due to the destruction of the forests, farming and poaching, it is believed that the number of them has dropped in the last 20 years. The lack of knowledge of their distribution and status, have been the mayor obstacle to any real conservation efforts to protect them.

It is very rare that humans will come into contact with the Spectacled Bear in the wild. This is due to the fact that they live in very remote areas around South America. There has been very little accomplished in the way of observing them or monitoring behaviors due to that location. In fact, early writings about these bears were often believed to be make up or legends due to the fact that so few actually saw them.