The South China Tiger is considered to be the one closest to the origins of all the subspecies. It is also the most distinctive of all the different tiger subspecies. This includes both those that are living and those that have become extinct. It is often referred to as the Amoy Tiger as well as the Xiamen Tiger.

The male South China Tiger averages from 290 to 390 pounds. The females are small with an average weight of 240 pounds to 250 pounds. They are a lighter orange color with black stripes of various thickness. They also have white on the face, paws, and the belly. Around the face they have plenty of distinct markings, and they vary from one South China Tiger to the next as a way to uniquely identify them.

The South China Tiger has been found in a variety of locations around China. They include Jiangxi, Hunan, Fujian, and Guangdong. However, it is unknown if there are any still living in the wild as they haven’t been seen for several years. There is evidence that they once lived in moist forest areas.

In 2001, extensive studies were done in 8 protected regions where the South China Tigers were once known to live. However, even with the best technology used there was no evidence found to support the options that this particular subspecies was living in region. Yet there continue to be some reported sightings of them that haven’t been confirmed or ruled out. The last such claim was in May of 2007. One of the goals of conservation efforts is to re-introduce these tigers to these locations in the wild.

Since there isn’t any information about them living in the wild that is well documented we have very little information on their natural behaviors. In captivity they seem to do well but they are very solitary and they can be aggressive towards each other. They are a common attraction at zoos due to their appearance and rarity. 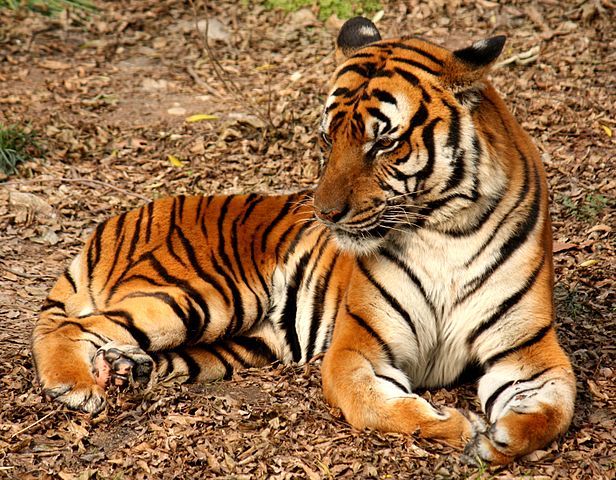 Like all other subspecies of tigers, they are carnivores. They prefer to consume large prey such as wild pigs, deer, and langur. They will also consume smaller prey when necessary including rabbits and porcupines. They have been known to prey on livestock too due to a lack of natural prey and the movement of humans and ranching efforts into what was once the natural habitat of the South China Tigers.

The South China Tiger is able to mate at any time of the year but the winter and spring seem to be the most common. Females are ready for mating about 4 years of age and for males it is around 5 years old. It takes about 103 days after mating for the young to arrive. They are born in a den and could range from 3 to 6 young. They are blind and weigh about 2 pounds each, depending on the milk from their mother to survive for the first 8 weeks of life.

When they leave the den, they are vulnerable to predators. They learn to hunt with their mother when they are about 6 months old. By the time they are 1 ½ years old they must have the skills to care for their own needs. In the wild these tigers are believed to be able to live up to 15 years. They can live up to 20 years in captivity.

Since 1996 The South China Tiger has been classified as critically endangered by the IUCN. It is possible that there are no more of them living in the wild. However, it is possible that they do live in the wild in small numbers but that they haven’t been seen. Issues with not enough prey to survive, habitat loss, and poaching have continued to make it very unlikely that there will be any proven left in the wild though.

The last verified record of one being seen in the wild was documented in the early part of the 1970s. This particular find was then taken into captivity. It is believed that heavy hunting in the 1950s and 1960s is to blame for their demise. There were approximately 4,000 of them living in the wild in the 1950s but by the time the Chinese government put a ban on hunting them in 1979 there were less than 1,000 remaining.

Efforts at this time focus on successful breeding in zoos and other select locations to help generate a good genetic pool for the South China Tiger. There are extensive efforts designed to help re-introduce these tigers to their natural habitat but that can’t be done until substantial numbers have increased. It also involves protection that can be carefully enforced in the wild and exploring all of the environmental factors such as food sources for them to thrive before it can be done.