The Sockeye Salmon is also referred to as the Red Salmon or Blueback in many regions. They range in size from 24 to33 inchesand they can weigh from 5 to15 pounds. They are believed to be very delicious and so they are among the types of fish hat are commercially gathered from their natural habitat.

The body of this fish is red with some yellowish shade on the head and tail. They also have some mixes of red and yellow on their fins. However, the red is only present when they are taking part in spawning. The rest of the year they are blue and silver. Most people don’t realize that and so these fish are often mistaken for another species when they aren’t red.

They have rows of very sharp teeth that are very small. They are very alert and are able to reduce their levels of stress by slowing down their body functions. This can also help them to need less food during periods of time when it is hard to find.

This fish is found in the Pacific Ocean as well various rivers that this water runs into. They are found in the Southern regions of the Columbia River and down through the coast of California. They are found in areas of the United States including New York, Colorado, New Mexico, and Wyoming. They are also found around Alaska and into Canada.

It is common for the young Sockeye Salmon to spend many years of their lives in freshwater. Then they will take the trip of migration into the ocean that offers them saltwater. They will return to the freshwater later on though for mating.

They live in groups that aren’t called schools. Instead, they are called binds or runs. There can be hundreds of them in one group. They tend to stay together to help them have protection from various types of predators that can be found in their natural environment. However, this grouping can also result in commercial fishermen getting a great catch for the day. 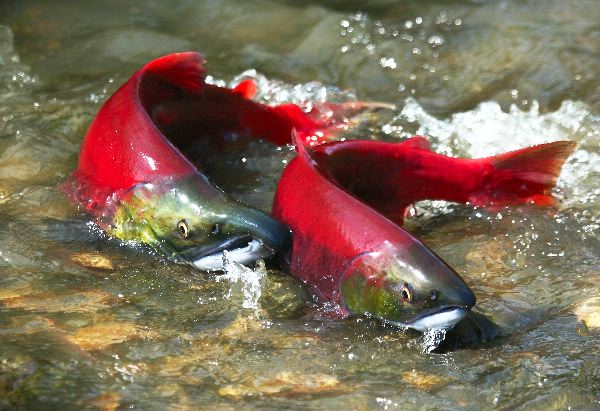 Zooplantkon is the resource for food of the Sockeye Salmon. It doesn’t matter if they are living in saltwater or freshwater. They will also consume insects and shrimp. They eat a great deal and they will look for food for several hours per day. They tend to take opportunities to eat even when they are full so that they can store up food for when there is a shortage.

The males are very aggressive when it comes to mating. During the spawning period they will develop a hump on their back that they use to fight with. They have to dominate other males if they will be successful for mating with the females. The fish will spawn in their native river locations so it may be a very long journey for them. This spawning period is from July to August.

As a result, all of the Sockeye Salmon are born in fresh water. A female can lay between 47 and 205 eggs. This helps increase the chances of some surviving due to the fact that there are many predators in the water that will consume those eggs.

Less than 1% of them will survive the 1st year of life. Even so though there are plenty of them in the waters. It is estimated that between 10 million and 30 million of them are removed from the water annually by fishermen. The average lifespan is from 3 to 5 years.