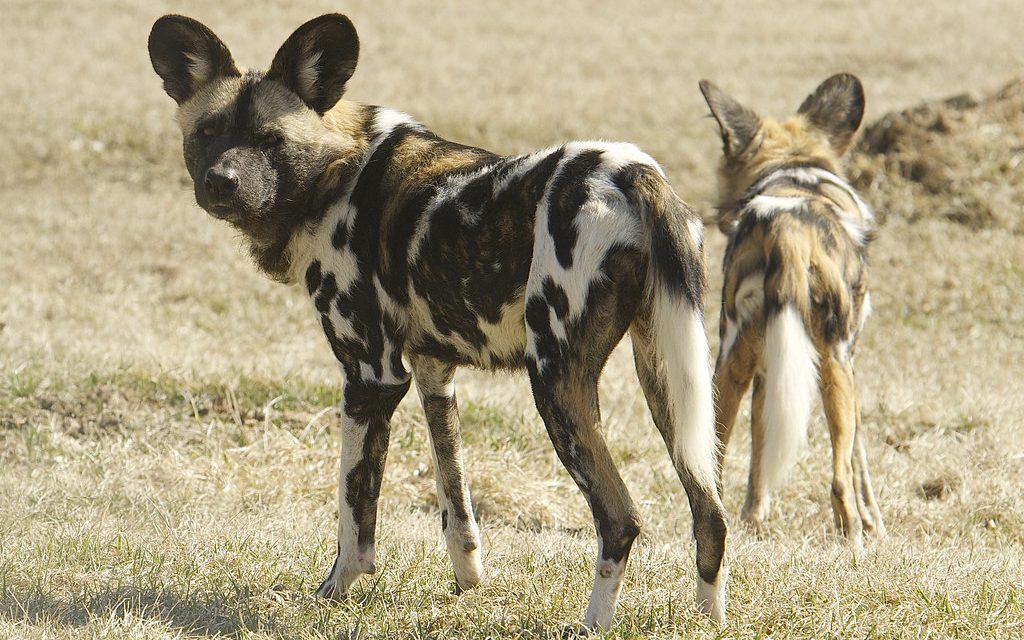 African Wild Dogs are known by many names such as the painted dog, African Hunting dog, Cape hunting dog, and Lycaon pictus which means ‘’painted wolf’’ in Latin. In Swahili, they are called ‘’Mbwa mwilu’’.  Found in southern Africa, their numbers are now in decline having once been found all across wherever the habitat was suitable for them. Their social behavior is based around packs and it is interesting to note the social interactions and hunting patterns that they have adopted.

A breeding pair that is monogamous leads the pack or is at least dominated by it. There is no particular mating season for the species though birth rates increase between March and June due to the rainy season. The gestation period is usually around 70 days but unfortunately, only a few of the pups will survive into adulthood due to predators.

Puppies are usually birthed in groups of 2 to 20 and the whole pack takes care of them. African Wild Dogs have been to share food and offer assistance. They interact with each other almost all the time and such behavior includes touching, vocal communication, and actions.

When it comes to hunting African Wild Dogs have an imposing reputation. Packs of 6 to 20 cooperate and will regularly hunt larger prey such as antelopes and wildebeest, particularly if the prey is injured. They will also hunt rodents and birds but this is their equivalent of a snack. They’ve also been known to hunt livestock though this is a rare occurrence. Caution must be exercised when you’re in the presence of them because they’ve been known to attack humans. A good rule would be to at least 50 m from them in order to avoid any difficulties that might arise.

Stamina is the tactic of choice when it comes to hunting, with cooperation being easily seen in their hunting methods as they attack in the morning or evening to avoid the high temperatures that occur during the middle of the day. They will spread out as they run so that their prey cannot run away. Normally prey will adopt zigzagging tactics to avoid capture but this will not work against the African Wild Dog. They will make constant high-pitched noises in order to stay in contact with the other dogs and will regurgitate their food in order to feed their puppies who cannot hunt at that age.

It is interesting to note that the dominance in each gender is at opposite ends of its life. It is the older female that dominates along while it is the youngest male that will dominate the male dogs. The main behavioral characteristic within the pack is submission and this is established without fighting. Begging for food is commonplace and this has the great advantage of avoiding injuries which in turn improves the packs’ ability to hunt for food.

Underground dens are used to breed and raise puppies who leave the den after 3 months. After 12-18 months they will reach sexual maturity and this is when something highly unusual occurs. The female will often leave the pack and try to gain access to a male dog. The male dog often rears the pack while the female dog goes out hunting for prey. This is a reversal of the usual roles that are found to be found in nature. Life expectancy is roughly 10 years.

Sadly the habitat of the African Wild Dog is under threat and it is also seen as a pest. Much work needs to be done in order to preserve this animal that is one of the more social creatures on the African continent.