The Snowy Egret is an exceptional bird that is often mistaken for a Crane or a Stork. They are somewhat similar in design but they do have enough differences to categorize them separately. The Snowy Egret features lovely feathers that are very thick. It is a sub species of the well known White Heron.

The body of this bird is full with very long legs. Their legs are quite thin but they are powerful enough to help them escape danger. The feet are yellow and the legs are black. They have an S shaped upper neck and head with a very thin bill that is black in color. They usually weigh 370 grams when they are fully grown. They can be up to 25 inches long with a wing span of over40 inches.

There are plenty of locations where you will find the Snowy Egret. They live around bodies of water including lakes, marshes, ponds, swamps, and along very shallow coastal regions. They are found in many locations around the world including the USA, Canada, Argentina, Nova Scotia and all along the Gulf Coast. This particular bird also does very well in captivity. They have been placed in zoos for education as well as to be part of breeding programs so that their numbers will increase.

One of the peculiar behaviors of the Snowy Egret is that they will use one foot to make circular motions in the water. In history there are writings about this that depict this bird as being crazy. However, experts now believe that there is a reason for that movement. It allows various types of food to be stirred up in the shallow water for them to dine upon. 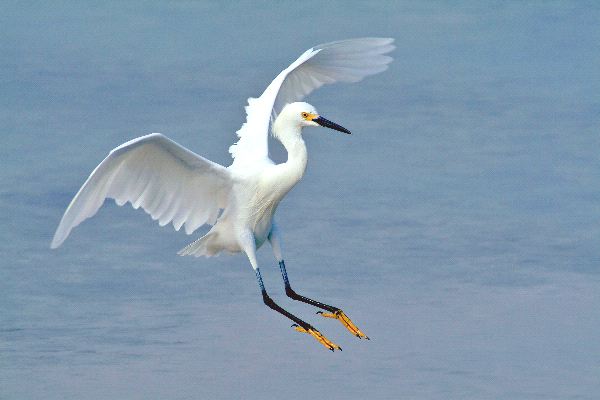 There is a very diverse food source for this particular bird. What they eat often depends on location. It also depends on what is readily available to them. They are opportunistic feeders so they will consume anything that they find. These food sources include crayfish, shrimp, small fish, crab, snails, snakes, insects, lizards, and frogs. They eat their food whole so what they find has to be something that they can easily swallow.

At the onset of mating season the feathers will grow new elements that are longer and thinner than the rest of them. This is believed to be to attract the Snowy Egret to each other. They will migrate long distances in order for mating to occur. The mating areas range from Maine to Texas and all along the Gulf Coast.

Once mating has occurred both parents will stay to care for the young. 3 or 4 eggs will be in the nest and they will take turns incubating them. It will be several weeks before the young emerge. The parents will take turns watching over them and bringing them food. In about 3 weeks the young will be ready to leave the nest and to care for themselves. The average lifespan for the Snowy Egret is 12 to 17 years.

At this time the Snowy Egret is considered to be threatened. They have been protected since 1916. The loss of habitat and other environmental factors have played a role in their dropping numbers. Still, there is plenty to be positive about in terms of them being able to get their numbers back up to a point where they won’t be in jeopardy any more. 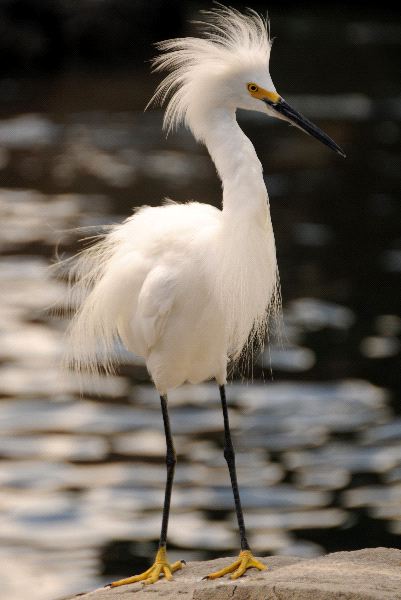