The Snowshoe Hare is believed to always be white, but that isn’t the case. They are white when weather conditions warrant it so that they can easily blend into their surroundings. However, they are also brown for part of the year so that they have the best chances of remaining well camouflaged.

This particular Hare offers very long fur and it has a round body. They store up fat that helps them to survive when there is less food. The layers of fat also help to keep them warm during the colder times of the year. They have long, pointed ears and very good hearing. One way to tell this Hare from all others is that the tips of the ears are black all year long.

The Snowshoe Hare is very fast and their legs are powerful. They are able to run on top of the snow instead of sinking into it. They have the ability to walk, to run, and to hop. They also have a very short tail. The Snowshoe Hare is about18 inches long and weigh about3 pounds.

The Snowshoe Hare is native to many locations found around North America. They live in many known regions including around mountains, on the plains, and in the cold areas around the conifer locations. They tend to live in areas that offer lots of pine and willow trees.

Many people assume that the Snowshoe Hare hibernates in the winter months but they don’t. However, they may spend lots of time underground during that part of the year. They are usually active at night and it is unusual to see one out and about during the day. They spend their day time hours in dens resting and hiding from predators.

They are very shy and they don’t have any way to really defend themselves. They will listen intently and if there are any signs of danger they will get to a rabbit hole or a den fast. They rely on their speed to help them remain safe. 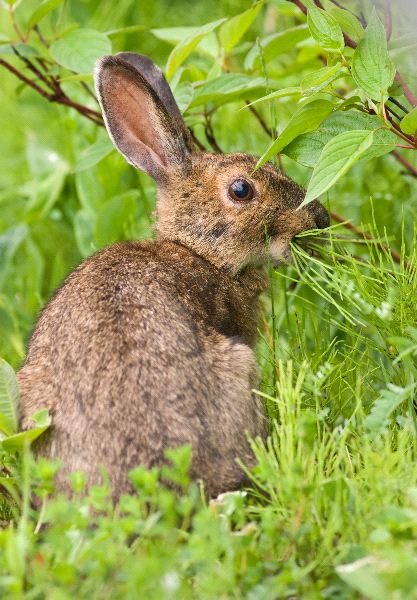 The food resources for the Snowshoe Hare will vary based on the time of year. Food is more abundant for them during the summertime. That is when they will consume grass, twigs, plants, and ferns. In the winter they will consume twigs and bark. Sometimes they will take meat that has been left in various traps. They will also consume rodents as well as other rabbits when they are facing death or finding enough to eat.

Like all Hares, this one has a very fast rate of reproducing. Females may have up to 3 litters per year. Each of them can offer from 1 to 8 offspring. There is a great deal of competition among the males for mating abilities with the females. They can take part in breeding all year long and they often do as long as their environment is low stress and they have enough food.

The young Hares will be born from 35 to 40 days after mating takes place. These young are called leverets. While the female is still pregnant and just days away from them arriving, she may decide to mate again.

With the right conditions many of the young will survive. However, there are many predators out there that will consume a large number of them before they are able to mate themselves. This helps to prevent the number of Snowshoe Hares from getting out of control. Too many of them in a given location will result in many of them starving.