One of the medium sized crested species is the Snares Penguin. They are often mistaken for the Fiordland Penguin. The way to tell them apart is this particular species features skin at the base of the beak.

The Snares Penguin ranges in size from 20 to 28 inches tall. They range in weight from 5 to 9 pounds. The males are slightly taller and heavier than the females. The body is dark blue or black with white on the belly. They also feature a bright yellow stripe along the eyebrows. It peaks to form a bush like crest. The bill is very large and is a reddish brown color.  They can also feature various types of coloring and designs under the flippers that is unique for each of them.

This species of penguin lives in New Zealand. They take part in mating on the Snares Islands that are on the southern coast. There is very little information offered about what these penguins take part in and where all their distribution covers outside of the mating season when they are found on those islands.

It is believed that they will only migrate as far as they need to in order to find enough food. They are often identified along the coasts of Steward Island, Australia, and Chatham Islands. They tend to live in tropical regions. From time to time, they have been seen around areas of Tasmania.

All penguins are vocal, but the Snares Penguins seem to have the largest range of different vocalizations that they take part in. Many of them are hard for the experts to decipher. They make a variety of sounds including hissing, cries, and even trumpeting. Their vocalizations can also be heard for a very long distance. More studies have to be conducted in order to get a better grasp on what all of these sounds mean to this culture.

They may growl to warn others to stay away from them. When males are fighting for locations, they may use their bill to push at each other. Charging has sometimes been observed among them trying to defend territory. However, usually no one is hurt in these behaviors to help establish a pecking order in the hierarchy. 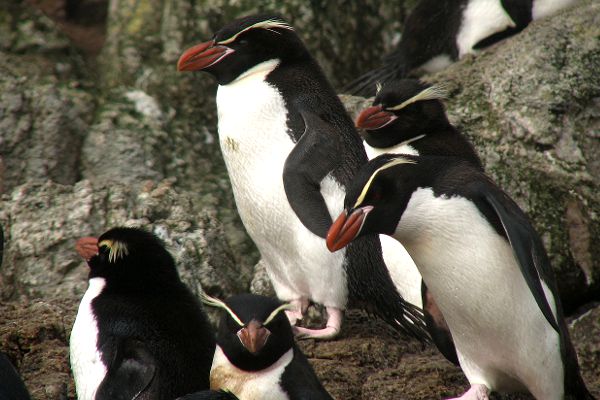 Almost all of the diet for the Snares Penguin is krill. They also consume cephalopods and small fish. What they will consume varies based on location and the time of the year. They are opportunistic and going to eat what they can in order to thrive. They instinctively eat more than they need to build up fat.

This allows them to fast for molting and for mating so that they will be able to survive without going back to the water for food. Penguins swallow their food whole, and they rely on a spiny element in the mouth and on the tongue. This allows the slippery food sources to go down the throat with ease.

Mating for the Snares Penguins only takes places along the Snares Islands. They can start mating between the ages of 5 and 9 years old. The males will do all they can to attract females to mate. They will stand tall with the wings fully extended. If she is interested, she will stick around and then he will bow. And she will respond. They will continue to mimic movements so that they can strengthen their bond with each other.

Pairs are believed to find each other annually and to mate again and again each year. The pair will work as a team to create a nest, but the male does most of the work. Nesting occurs in the dense areas around trees of the Olearia forest or the rocks of the coast. They will dig shallow holes in the ground and then add layers of pebbles, leaves, grass, and twigs to complete the nest. They will create a rim around it make out of mud.

The female will lay two eggs in the nest, and they will take turns incubating it until the hatch. This is from 31 to 37 days later. The second egg is several time larger than the first and it will hatch first. The first egg usually doesn’t produce a chick that will survive. The parents will both take turns watching the young chick and brining it food. It takes about 11 weeks for it to have feathers that allow it to go into the water.