The Sloth Bear is named due to the way it looks like a Sloth, but it has more in common with bears than this other type of animal. They have a unique appearance that makes it simple to identify them. You will notice that they have long fur that is very shaggy. They are dark in color with shades of brown or black. The hair around the neck resembles a mane.

The adult males can weigh up to 120-400 pounds being the average 220 pounds and may have a body length of 4.6 to 6.3 ft. The females are slightly smaller than the males, but have more fur between the shoulders. They don’t have any front teeth in good condition but this allows them to suck up ants and termites easily.

The Sloth Bear is mainly found in India, Sri Lanka, Nepal, Bhutan and Bangladesh. They can be found in the grasslands or in the humid regions at higher elevations.

A very unique characteristic of this type of bear is that they live in small groups rather than alone. The group is formed by a pair of adult Sloth Bears and their cubs and has a male that is dominant over the rest of them. These males also help to care for the young – and that isn’t something you will find with any other species of bear.

Generally these bears sleep during the day and hunt for food at night. They are often found in the trees due to being able to find food there. It also helps to protect them from predators. They don’t hibernate but they do spend a great deal of time resting in caves during the rainy season. 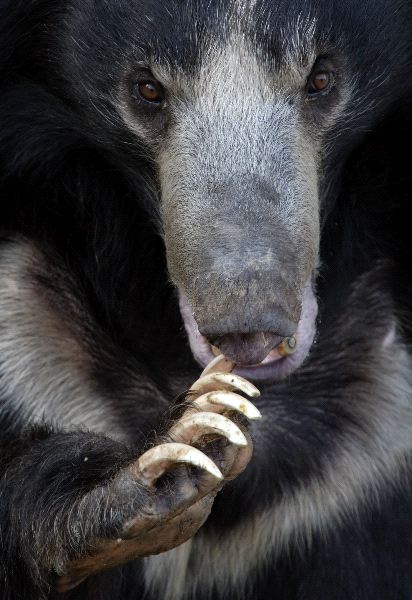 Physical characteristics of Sloth Bears make them able to easily suck up large amounts of ants and termites. This is the primary source of their daily nutrition. The humidity in the areas where they live often offers tons of termites to feed on. They also hunt for various fruits that may be in season throughout the year.

They have a sweet tooth as well so the Sloth Bear can be found eating honey, sugarcane, and yams. They rarely prey on other mammals, but they are considered omnivores.

The Sloth Bear is able to reproduce any time of the year, but the breeding season varies according to the place they live. While in Sri Lanka they give birth all year, in India they mate in April, May and June, giving birth in December and January as their gestation period is between 6 and 7 months.
As long as they have enough food and a place for shelter they will feel comfortable doing so. The females are great at caring for the young. Due to the help of the males in their group there is a low mortality rate. After about two years the young cubs will leave the group to join another. Intervals between litters can last 2–3 years and consist of 1 or 2 cubs, rarely 3.

Strong conservation efforts are in place to help maintain the decreasing population of the Sloth Bear.
Protecting their environment and preventing poaching are the main efforts in place to protect them. The economic development in the countries they live is often deemed as more important than protecting the land for animals. 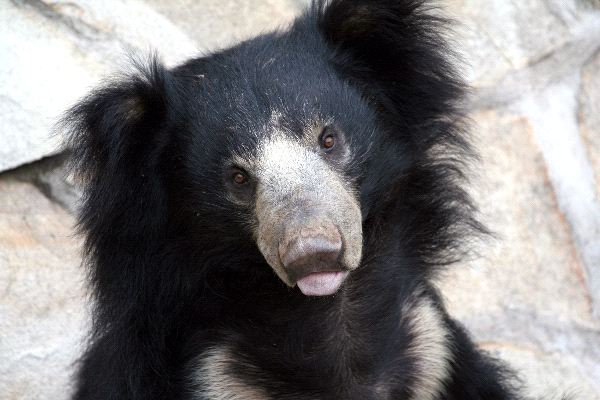 Humans continue to tear down the territory where the Sloth Bears live. As a result more people are coming into contact with them. They are often hunted in India along with the Bengal Tiger. Both of these animals are considered to be a big trophy hunting goal even though the numbers of both of them are very low.

Sloth Bears have been captured as pets as well and dancing bear were historically an entertainment in the region.