The overall anatomy of the shark is very intriguing, and it continues to show us the amazing elements in place for them to survive.  There are more than 400 species and they vary significantly in design and in size. The smallest species is about 6 ½ inches long with the largest species being up to 40 feet in length.

Even though sharks are fish, they have a skeletal design that is very different. They are cartilaginous due to the amount of cartilage and tissue that they offer. This cartilage is very flexible and it isn’t as dense as bone. As a result, they are able to save energy. Sharks don’t have a rib cage which is why they can’t survive on land – their own weight would crush them.

All species of sharks have fins but they can vary in size and shape. They are made from protein, and most of the species have 8 fins. They also feature from 5 to 7 gill slits. These are located on the sides of the head. There are also pectoral fins around the head, but they aren’t fused to it.

The eyes of a shark are on the sides of the head so that they can see around them. They also have very good vision so that allows them to do well even in murky surroundings. The eyes are very large. The nose of a shark can be wide or it can be long and narrow depending on the species. They have very good smell and rely on that sense to help them with their overall survival.

The tail of a shark can also vary in size and shape. This provides them with the means of moving in various directions and speed. The outside of a shark is covered with denticles to offer their skin protection from various types of damage and to limit the effects from parasites. However, they can still be highly susceptible to various forms of disease. 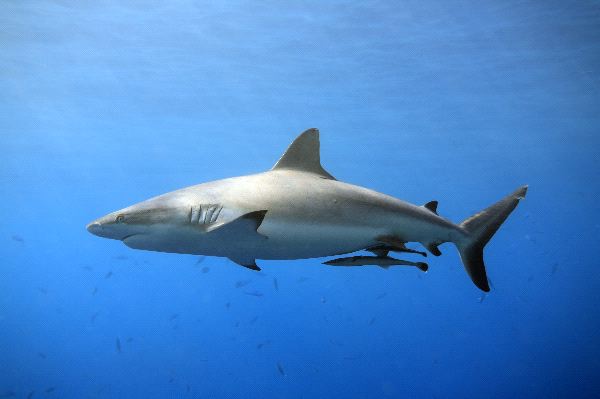 Sharks have a full mouth of teeth from the time they are young until they die. They will continue to loose teeth and for new ones to appear. Throughout their life, they are replaced due to them having rows of teeth. Over time, a complete area of them can move into place to replace older ones. This can take place after a few days or after a few months depending on the species of shark. Some of the species will go through 30,000 teeth during their life span!

Some sharks have very sharp teeth and others are flat. Those that are carnivores have the sharp teeth for ripping and tearing. Those that are filter feeders have teeth that are very small and they don’t do much with them. There are those sharks that have flat teeth so that they can crush mollusks and crustaceans for that diet. Other sharks need to have pointed teeth that allow them to grip prey. They also have some teeth with serrated edges to cut their prey.

Overall, the senses of sharks allows them to do very well in their environment. They heavily rely on the sense of smell to help them identify prey that they can consume. They also rely on vibrations in the water and sight to help them find what they are looking for or to avoid danger. The overall value of these senses can significantly vary though based on the species of shark you are talking about.

Sharks do have eyelids but they don’t blink! This is because they use the water to cleanse their eyes. It is believed that only one side of the brain of a shark sleeps at a time, and they sleep with their eyes wide open!