Servals are medium-sized small cats, closely related to the caracal. They are one of the few species of wild cats that are quite commonly kept as domesticated pets – and there is a hybrid breed, the Savannah (cross between domestic cat and serval), which is legal to own domestically in most countries.

While they are described as being of “least concern” to the IUCN, they are not without threats to their species – they have become regionally extinct in some parts of South Africa where they used to thrive, and it is suspected that servals in Algeria have suffered the same fate. Human populations have moved in on their habitats in some places, and have hunted them for their pelts – and they are occasionally preyed upon by larger cats in regions where the two co-exist.

It’s very widely known that the ancient Egyptians kept tamed cats as pets, both as companions and to help keep the rodent population to a minimum.

Servals are golden-tan and beautifully spotted, with friendly, familiar-feeling faces that look a lot like those of our own domesticated pets. They have the longest legs in relation to their body size of any cat, but their tails are relatively short – they’re not frequent climbers, and so they need developed limbs for running more than they need a long tail for extra balance.

Their ears are as large as a caracal’s, but shaped like scoops instead of points – and without the prominent ‘tufts’ that are characteristic of the closely-related species. This extra hearing ability allows them to listen out for small, quiet prey animals. There are distinctive white patches on the reverse of serval’s ears, which the females uses to signal to her kittens to stay back while she is hunting. 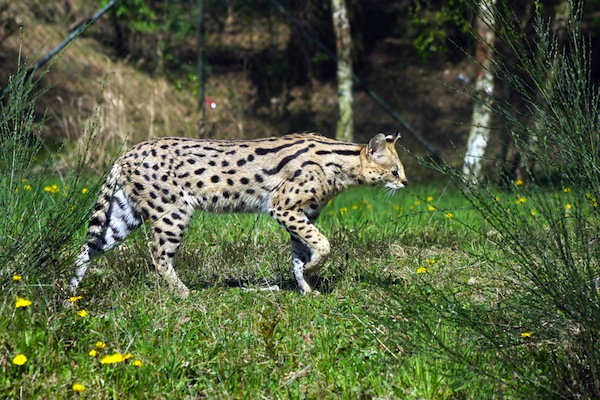 Servals live exclusively in Africa, almost all in South Africa and Tunisia. They live by preference in the savannah – hence the name of their domesticated cross-breed – and avoid entirely areas that do not include watercourses. They cannot sustain life in a dense jungle, either, instead seeking out somewhere more open to live and hunt.

They are not endangered – the only spotted cat who isn’t – but there’s a distinct chance that they might become so in some areas if populations are not protected, and as such there is a push in many places to restrict the hunting of servals and ensure the continuation of their habitats.

Servals, like most cats, are solitary, nocturnal animals. They keep and defend large territories, and they’ll sometimes walk for miles while on their nightly hunts. When preparing to give birth, they will seek out an abandoned burrow belonging to another animal – most commonly an aardvark. In the absence of such a spot, however, they’ll happily birth kittens underneath bushes. Otherwise, they tend to sleep out in the open.

They’re very intelligent, and in captivity demonstrate remarkable problem-solving abilities. They can outwit their prey and elude their predators, and they’re not at all foreign to playing games – kittens play with each other and with their mothers, and adult servals will often play with their captured for some time before making the final, inevitable kill.

A serval hunting is a sight to behold. They possess an astonishing talent for jumping, leaping and pouncing; they can jump anything up to 10ft into the air from standing using their developed legs and precise ‘hopping’ technique, and from a stationary position can also leap up to 12ft forward.

In addition to their amazing jumping and pouncing abilities, their well-developed ears allow them to sound out their prey with astonishing accuracy – they sometimes freeze stock silent for as long as a quarter of an hour, simply listening, waiting for the perfect moment to make the leap.

Their diet, by and large, consists of small prey – birds, hares, hyraxes, reptiles, amphibians, insects and fish. They’re opportunistic hunters, and will eat anything that comes their way that they think they can take. They very occasionally attack and then eat gazelle, deer or springbok, though this is rare. 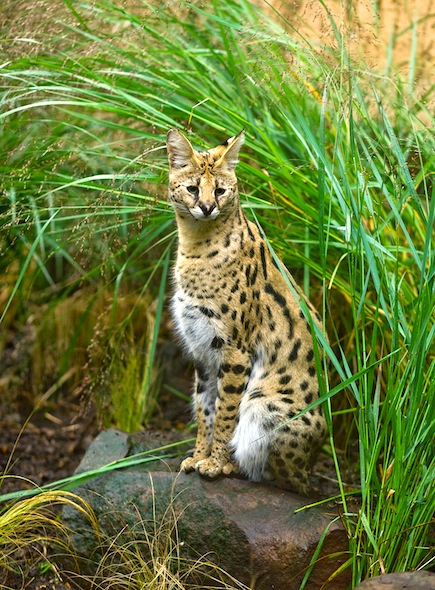 Mating occurs in the springtime, usually, with the female hunting down the male she particularly wishes to mate with over the course of several days. They will copulate once she comes into oestrus, and then she will return to her own territory and wait 65-80 days before it is time for her to give birth.

Most serval litters consist of exactly two kittens, though there are of course exceptions. They tend to be weaned after five months, but they don’t usually leave their mother’s side until they are a year old – which is usually a good six months before they reach sexual maturity, giving them time to establish a territory of their own before it is time to breed.