Sea turtles are very amazing in many ways! They are reptiles and they are found all over the world in the oceans and other bodies of water, with the exception of the Arctic region. They tend to live in the water areas and to stay closer to the coastline. They can travel very far though for migrating in order to mate and to lay eggs. There are studies that involve tagging sea turtles to see just how far they go.

The information that has been noted shows that some sea turtles travel quite far and others don’t. It may have to do with the species as well as the location where they were born. They seem to be very drawn to their own birth location for mating and for laying eggs. This is a very interesting theory that most experts agree on. It is also very different from the movement patterns and reasons for movement of most other migratory creatures.

There are 7 species of them and all of them are at risk right now due to threats to their habitat. The fact that they have been around for more than 110 million years though is very interesting! They have been able to survive plenty of changes all around them during that amount of time.

One of the most telling signs of a sea turtle is the shell. However, this particular type of turtle can’t pull the body into the shell. Instead, it serves as a means to help them successfully swim in the water. The coloration of sea turtles can be a variety of shades of green, black, and yellow. Their colors depend on species.

The size of sea turtles varies based on their species and location. They average from 20 inches to 40 or more inches long. They can weigh from about 70 pounds to about 1500 pounds. The males and females are similar in size for their species. Due to the various food sources, it is explained why the same species of sea turtle can be quite a bit larger in one location than the next.

Almost the entire life of a sea turtle will be spent in the water. However, females do leave the water in order to lay their eggs. The young hatchlings will then have to scramble from land to reach the water without predators getting to them first. Sea turtles may travel a very long distance to get back to the same nesting grounds where they were born. 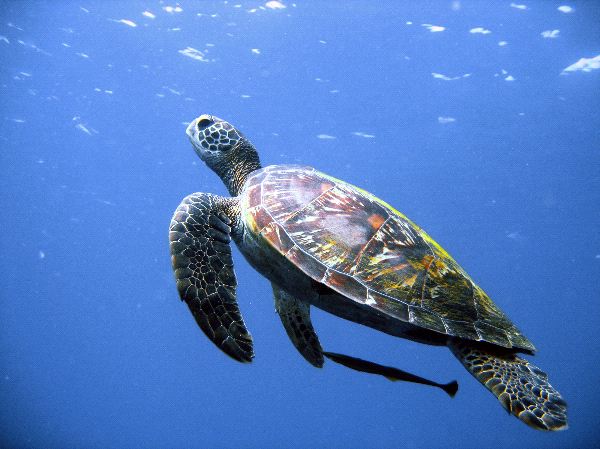 While sea turtles usually live alone, there are times when you will find them in numbers. When they are migrating to find mates they often congregate in the same area. When they are traveling to nesting grounds, you will see groups of females together on that journey. Turtles don’t mate though until they are 20 or more years old.

There is a great deal of information that experts don’t really know about the behaviors of sea turtles. While we do know the basics there are many characteristics that still need to be evaluated in depth. It is believed they are very intelligent and that they have amazing instincts that allow them to adapt to various changes around them in order to survive.

Due to the destruction of habitat of sea turtles, many of the species though are in danger of surviving. There are some great conservation efforts in place out there to help with protecting them. However, there is still plenty more that must be done to help them get their numbers back up. It is possible for a sea turtle to be able to live up to 80 years in their natural environment if the conditions are right.

How have sea turtles been able to survive for more than 110 million years? It is a an amazing journey that goes back to the time of even the dinosaurs roaming the Earth. These reptiles have been able to adapt to their environment and that has allowed them to survive so long. The fossil remains of them though show us that there have been some evolutionary changes along the way. However, they have been slow coming and for very long periods of time they have remained virtually unchanged.

Based on the fossil records that have been located and analyzed, the first turtles were around during the Triassic Period (245 million to 208 million years ago). It is believed the sea turtle was around in the Late Jurassic Period and that they were the result of ancestors that lived in the marshlands. These reptiles were able to survive along with crocodiles, snakes, and iguanas.