Not all sea turtles out there are the same! There are 7 species that have enough differences that they are separated by scientific terms. Here is some basic information about each of them, but you may want to look at each of them more closely to find out where they live, what they eat, and more.

The Kemps Ridley Sea Turtle is a small species with a length of about 3 feet and weight of about 100 pounds. The body is oval which is different from the heart like shape of other species. They also feature a triangle shaped head. They have a beak shaped mouth that allows them to get crab, their primary food source.

There is less information known about the Flatback Sea Turtle than other species. They vary greatly in size and they also migrate long distances for mating. They consume both plants and animals and they are considered to be a medium sized sea turtle.

One of the medium sized is the Hawksbill Sea Turtle. They have a shell that is longer than other species but a very small head. In fact, their head seems to be much too small for their body. They also have a beak like mouth. They have claws on the front flippers that can be red, yellow, and orange in color. They average about 3 feet and around 300 pounds in weight. Feeding on sponges is common for them which is why they are often found around the coral reefs. They can live up to 50 years in the wild. 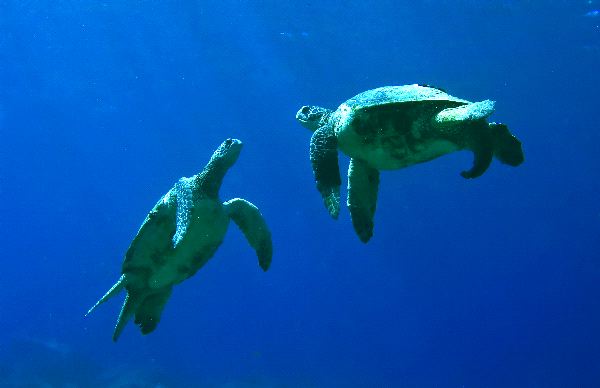 The olive coloring is well recognized for the Olive Ridley Sea Turtle. This is the smallest of the species of sea turtles. They are up to 3 feet long and weigh around 110 pounds. They have between 6 and 9 pairs of costals while other species of sea turtles only have 5. They mainly consume meat but have been known to also consume algae when such food sources are scarce.

The Green Sea Turtle is extremely common, but they tend to live around the coasts of Florida and Mexico in the Pacific Ocean. They are about 5 feet long and very large with a weight of around 400 pounds. When they are young they are gray in color but they will start to turn various shades of green as they get older. They consumer both meat and plants.

The largest species of sea turtle is the Leatherback Sea Turtle. They eat a variety of food and they also travel a long distance for mating. Their main source of food is the jellyfish.

Loggerhead Sea Turtle is very recognizable due to the size of the head, larger than other species. They have a large jaw too and you will notice that they have yellow and red featured on their flippers. They are very good divers and they consume only meat. They are about 3 feet long and they weigh around 300 pounds.

It is possible for a sea turtle to be able to live up to 80 years in their natural environment if the conditions are right. All of these sea turtles are at risk of their future not being a bright one due to loss of habitat and due to loss of food sources. They are vital to humans for what they contribute in terms of keeping the beaches from eroding and also eating the sea grass to keep it healthy. Balloons and plastic bags represent the greatest threat to sea turtles.  Save the beautiful sea turtles from pollution and extinction.