The body of the sea turtle is very fascinating, and it has allowed them to live for over 100 million years! Like all other turtles, they do have a shell. However, what you may not know is that they don’t have the option of going inside of that shell for protection. Their legs and head don’t go in there like they do with other species of turtles. That doesn’t mean their shell doesn’t serve a purpose though. It helps them to be able to navigate with ease in the water. It also helps to protect them from the elements around them and various predators.

The Leatherback Sea Turtle is the only species that doesn’t have the hard shell. They feature bony plates under the skin. For all sea turtles the skin feels like leather. There are prefrontal scales on the head. There are plenty of anatomy differences for sea turtles though that are dependent on their body. The design of the shell is something fascinating to look at. As you compare them you can see various differences for the various species.

The overall size of the sea turtle depends on the species of it as well as where they live. Some are tipping the scales around 70 pounds and others are closer to 1500 pounds. Some of them are about 20 inches long and others are more than double that size. They can be yellow, green, or black in color. It can be very hard to tell the males and females apart as they are about the same size. As adults, the males have tails that extend longer than the females.

All species of sea turtles have a heart or oval shaped body. For example, the Kemp’s Ridley Sea Turtle have an oval shape body. The flippers are a key part of the anatomy for sea turtles that allow them to do very well in the water and to swim. However, they move very awkwardly on land and that makes them very vulnerable. The females are the only ones to go to land and they do so in order to deposit their eggs. 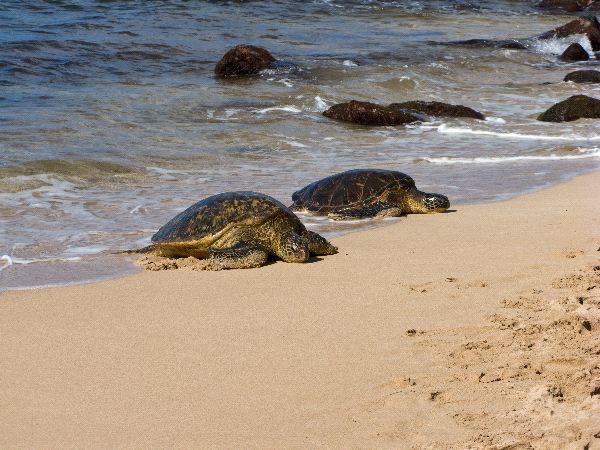 The forelimbs are long and look like paddles. Each of them has one or two claws that allow them to dig in the sand. For many species, the males also use their claws in various mating rituals with the females. The claws can be used to grab her so that she won’t swim away. The design of the claws can be hooked with some of the species of sea turtles.

All of the species of sea turtles have 5 pairs of costals or scutes with the exception of the Olive Ridley Sea Turtle which has up to 9 pairs. You may not even know that sea turtles are present in the area where you see water. This is due to the fact that they almost always stay submerged under the water.

They have a very complex and well designed anaerobic system that allows them to metabolize their energy. This means that while they do need to breathe air, they can go without it for very long periods of time.

Sea turtles also have a salt gland that allows them to remove the sold from their body. It is located in various areas depending on the species. For some it is around the nose, others around the eye, and still others have it on their tongue.

Sea turtles don’t have external ear openings, but they are able to hear well. They don’t have any teeth either. The jaw of each though is designed to accommodate the diet.