The Scarlet Macaw is one of the most colorful and the largest of all Macaws. It is a type of parrot that is commonly sold in the pet trade. People love having an exotic bird such as this one that they can put on display in their home. It is also recognized as the National bird of Honduras.

This is a magnificent bird that features a variety of bold colors. They have an extremely long tail of various colors. The body may be comprised of reds, blues, greens, yellows, and white hues. They feature a white bill that is turned downwards.

The Scarlet Macaw is about32 incheslong and weigh about2 pounds.

The Scarlet Macaw lives in the humid regions of the rainforest and in the tropics of Mexico and the Amazon basin. They are found in Brazil, Bolivia, Panama, Guatemala, Honduras, Paraguay and Peru. They can still be found on the islands of Coiba. They seem to do very well in captivity as long as their basic needs are met. They do have a need for socialization so this type of bird shouldn’t be left alone frequently.

This bird is well known for it frequent sounds and calls. They can be very low, medium, or high pitched. They have many squeals, squawks, and squeaks that help them to communicate, to give warnings, and to keep their territory safe. These calls from the Scarlet Macaw can be heard for several miles to give you an indication of how loud they can be.

They can live alone or in a flock. It isn’t unusual to see them in either format. Sometimes though they are all loners that just happen to end up at the same place for rest and some socialization. Then they will be on their separate ways again.

They can be come very aggressive in captivity if they aren’t well cared for. It is a good idea to have a pair of them so that they have a companion at all times. This is something that is required in a zoo setting. Owners do need to be careful as the Scarlet Macaw can bite fingers that may be entered into the cage. 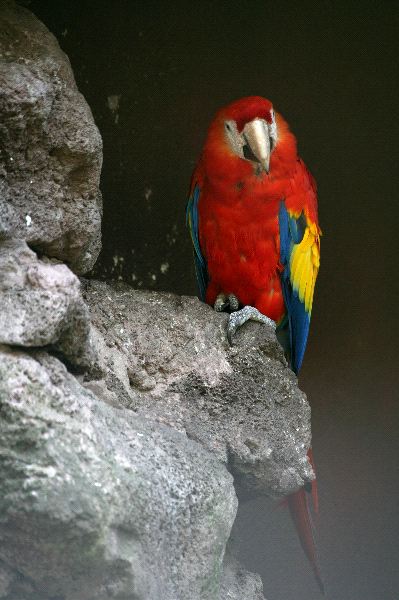 Most of the diet for the Scarlet Macaw consists of seeds both in the wild and when they are in captivity. In the wild they will consume fruits that are offered during various seasons of the year. They will also consume nuts.

The males will offer a variety of calls and ritual dances to the females in order to get them to consent to mating. Once mating has occurred there is the process of creating a nest to place the eggs into. Both parents work hard to offer a nest for 2 or 4 eggs. They take turns with incubating them as well.

It takes about 25 days after the eggs are placed into the nest for the chicks to emerge. They depend on both parents to offer them protection and to bring them food. When they are about 3 months old they will be able to fly and help get their own food. They will remain with their parents for up to 1 year.

In the wild the average lifespan is from 30 to 40 years. In captivity though they have been able to live up to 50 years.

While the numbers of Scarlet Macaw continue to be high, there is a vulnerability issue for them. This is due to loss of habitat as well as the increased demand for them within the pet trade. To help reduce the problem it is now illegal to take them out of the wild and to sell them as pets without a permit. 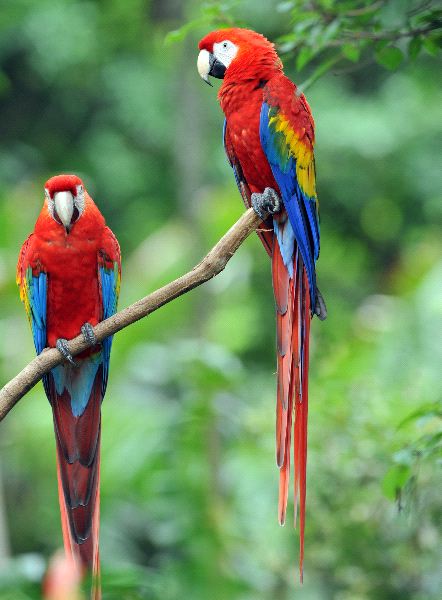