The appearance of the Royal Penguin is very similar to the Macaroni Penguin and the King Penguin. They were discovered by Hermann Schlegel, a German Zoologist. They are currently considered to be one of the species of penguins threatened for extinction. While the number of them right now is decent, the threats of environmental changes, pollution, and humans it drastically reducing those numbers. There are debates about them being a sub species of Macaroni Penguins or not.

This is a medium sized penguin that averages from 26 to 30 inches tall. They can vary significantly in weight from 6 to 18 pounds. The males tend to be larger than the females. They have a white face and a white chin which is a key way to distinguish them from the Macaroni Penguin. They also feature yellow and orange crests that are from the side all the way to the top of the head.

The Royal Penguin lives around Australia and the sub Antarctic Islands. This includes Macquarie Island. They are migratory and they will leave from the islands after mating. There is still a great deal that isn’t known about where they go after that. They have been spotted around Tasmania but not always. It is believed that food supplies, environmental conditions, and more trigger where they will go. They may travel very long distances in order to ensure their basic needs are going to be met. 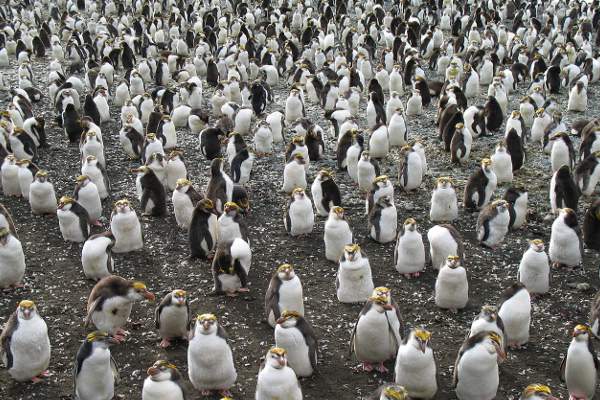 The Royal Penguins live in large colonies, and they are highly social. They rely on the ability to identify the sound of their mate’s vocals and that of their offspring in order to find each other with ease. They spend a great deal of time closely together when they are on land. This can seem chaotic to humans, but it works well for them.

There is still  plenty about their behavior that experts don’t know. They seem to do okay in captivity, but due to the volume of numbers that they like to have surrounding them, it can prove to be far too expensive to offer them such a home in captivity.

Over half of the diet for the Royal Penguin consists of crustaceans and squid. The rests of it is small fish and krill. The diet though varies based on the location. They do have to eat an abundance of food when possible. This allows the penguins to build up layers of fat. When they are on land for mating or when they are molting, they rely on those layers of fat to help them survive as they won’t be able to go to the water for food. They feed both in the morning and in the evening. They have the ability to dive deep for food, but usually don’t do so unless finding food sources is proving to be difficult for them. 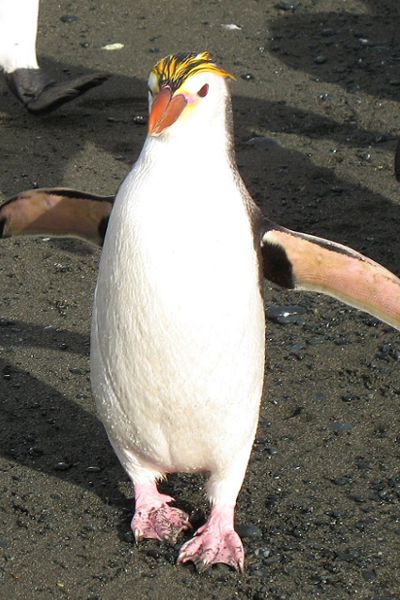 The only known place where these penguins mat is Macquarie Island. The males arrive in late September to secure their territory for the nest. The males can be very aggressive when it comes to securing the best locations. The females will arrive in October. The Royal Penguin becomes sexually mature at one year. There are plenty of vocalization and body movements in order to attract a mate.

A pair will often call out to each other if they have mated before, and will mate year after year. If a mate doesn’t show up then the other party may decide to mate with a new partner from that time on. After mating, the pair will have to create a nest. They use various forms of debris in the area to create it. This can include sand and weeds.

Usually, the female will lay two eggs in the nest. However, it is unusual for more than one of them to survive. The first egg is small and it is common for the parents to discard it. The reason for this though isn’t fully understood. The parents will take shifts to incubate the egg. This is typically for 12 days, and the chick will emerge in approximately 35 days.

The male will care for the young after it hatches and the female will go get food for them. After 10 days or so, they will switch roles. This continues until the chick is about 70 days old. Then it will have molted into adult feathers and have to find its own food.