The Rockhopper Penguin is one of the crested species, so that makes it fairly easy to distinguish from other species. There are still plenty of experts that disagree this particular species should be identified uniquely though from others that are crested. For the time being though that is how they are identified, and many feel that the DNA testing shows enough differences that it should remain this way. They may be eventually broken down into the Southern, Northern, and Eastern Rockhopper Penguins.

This is a medium sized penguin that features feet that are very short. They have legs considerably further back from the body. This allows them to move with easy in the water but does give them an awkward appearance on land when they move. They have a coat with many feathers that helps them to stay insulated. The feathers are also waterproof which prevents the feathers from getting heavy as the penguins spend time in the water.

On the top of their heads, the Rockhopper Penguin features plumage that is bright yellow in color. The yellow color is also found on the sides of the head. There are some black feathers too found on top of their head. Overall, it provides this penguin species with a very unique and interesting look.

The males are slightly larger than the females, but they are so close in weight and height that it can be hard to tell them apart from each other by physical appearance only. They range in height from 18 to 23 inches tall. They can weigh from 5 to 8 pounds. The body is well designed to make swimming easy for them and something they can do without expending much energy. They also have a bill that is slender and reddish in color.

You will find the Rockhopper Penguin around the various islands of the South. A large number of them are found around Falkland Islands. They can be found in the North further than any other species of penguins. They may be found in tall grass areas or along the rocky shoreline areas. In south, you will find a very large population of about 2 million. They are found around islands of Southern Chile and Argentina. They are also found around Diego Ramirez Islands and Isla Noir. From time to time they have also been found in various numbers around South Africa and New Zealand. 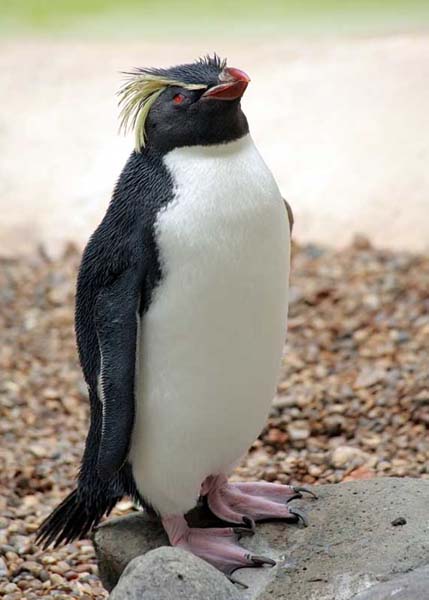 Like all species of penguins, the Rockhopper Penguin is very social. They are almost always seen in large groups. You will rarely ever see one of them alone either on land or in the water. They tend to thrive on the social aspects of their colonies. This includes through various vocalizations. They rely on a variety of sounds to help them identify each other, to warn of danger, and to protect their territory.

These penguins are more aggressive than most species. They may peck at each other and spread their wings widely. Most of the aggression is among the males that are competing for food and for nesting locations. This species of penguin hides their head under their wings when they are resting on land. It could be a way for them to retain their body heat more successfully.

A great deal of their time is spent in the water. After they leave their mating colony they can spend up to 5 months in the water. They will only come out for short periods of time to rest and then when molting takes place. They will also come to shore so that they can take part in preening. This essential process ensures that they have enough oil on all of their features to offer them the level of insulation and water proofing that they need.

The process of molting lasts for about 25 days. During this period of time, the King Penguins will gather on shore and not enter the water. This process involves their old feathers coming out as new ones are pushing in. This is an annual occurrence for them and the time of year can vary based on where they live.

Preening is an important part of their care for the feathers. This involves taking oil that secretes from a gland by the tail. They use their bill to move it around the body to get to all of the feathers. They may need to twist and turn their bodies in all directions in order to make this occur. They may even help each other with this process. The oil helps them to keep their insulation and also to stay waterproof. Otherwise, the elements can be too cold for them and they may experience heaviness in the water. 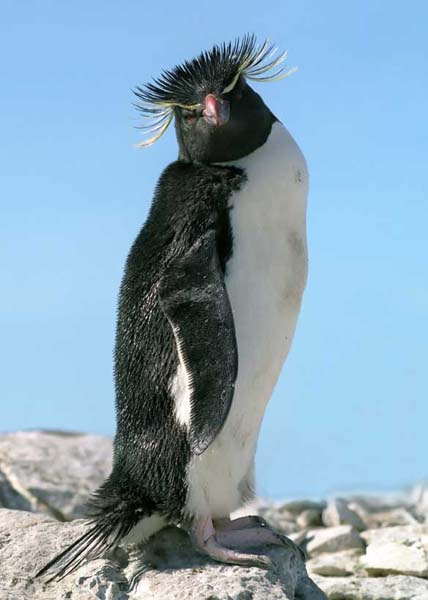 They are very opportunistic when it comes to feeding. The majority of their diet comes from krill. They will also eat a variety of small fish, squid, octopus, and crustaceans. The main food sources though can vary based on location and the time of the year for the Rockhopper Penguin. All food is swallowed whole so it must be small enough to do so. They rely on spiny barbs in the mouth and on the tongue to give them some traction with the food.

They will spend many hours a day foraging for food. They need to consume enough not just for daily survival but to build up layers of fat. During mating and during molting, they will stay on land and they need those reserves while fasting. Most of the time they will stick to the shallow areas of the water. However, they are able to dive up to 100 meters when necessary in order to find their supply of food.

The mating colonies are very large and they are very loud. There can be hundreds of thousands of them in one area. They will go to the same location annually and they will seek out their mate from the previous year. They can do this with their unique calls and find them with ease among such noise and commotion.

For new mating, the males will select a nesting location and may have to fight with other males to secure it. Then he will call out to let available females know he is on the market. When one is interested, she will call back. They will go through various dancing rituals and body movements to secure a bond between them before mating.

Mating season begins in September and on through the end of November. They will create nests inland at times but usually around the top of cliffs where they will be well protected. The female will lay two eggs in the nest but the first one is going to be significantly smaller than the second one. Usually, the first egg won’t be incubated so it isn’t going to hatch.

The second egg will be incubated by both parents who will take turns with it. One will watch over it while the other goes to feed. This process lasts for about 35 days. Once the chick is born, they will take turns bringing it food and also caring for it. This process lasts for about 26 days. Then the chick will have feathers that allow it to successfully go into the water and find its own food.