One of the interesting looking dolphins out there is the Risso’s Dolphin. They are unique in how they look and so they are very appealing to both the common observer and to researchers. Both genders are close to the same size so you won’t be able to tell them apart that way. They have been misidentified as the Bottlenose Dolphin in some locations.

One of the telling signs that you are indeed looking at the Risso’s Dolphin is the design of their head which is shaped like a square. They feature a dorsal fin that is very long and they have long flippers which are recurved. The body is quite stocky but towards the back of the body it will begin to taper. They can weigh up to 880 pounds. Their length can range from 8 ½ feet to 13 feet.

Another great feature of the Risso’s Dolphin is that it can be found in various colors. They are gray or brown at birth with some white on the belly. They can feature yellow around the muzzle and there is white on the flippers. As they get older though they will turn silver colored and then when they are close to mature they will turn black. The patches of white though will remain from birth until they die.

They have teeth in the upper jaw only that are pointed and peg like. They may have 2 to 7 pairs of them. They only use them to get prey, not to chew as food gets swallowed. They may use the teeth though to compete for a mate or to fight.

These dolphins only live in the warm tropical regions with temperatures that range from 59  to 68 degrees Fahrenheit. They spend lots of time in deeper bodies of water so it isn’t often that humans actually get to see the closer to the shore. They are found in many locations but not the Black Sea. Even though such information continues to circulate, it isn’t a region where they have been confirmed. They do live in the Persian Gulf, Mediterranean Sea, and the Red Sea. 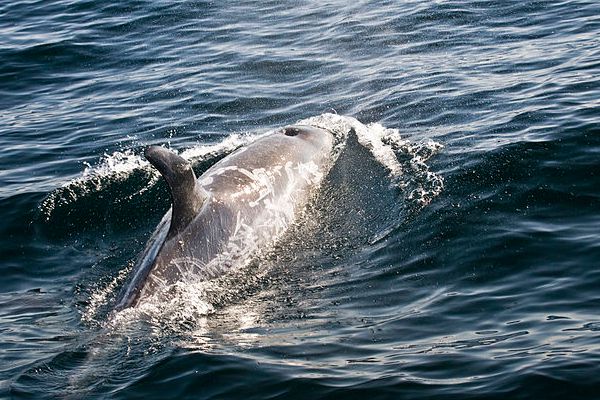 Risso’s Dolphins don’t get extremely close to boats, but they will surf on the bow waves that are created. There isn’t too much information well known about these dolphins, but they are considered to be quite social within their pods. These pods can contain from 10 to 50 members and they do bond significantly with each other.

There are times when you will see very large pods –with more than 4,000 members – due to the migration that takes place. They follow the warmer waters and they will also migrate to find enough food. With the larger pods, there are plenty of subgroups found within. They are also often found interacting with other types of dolphins.

Females are ready to mate around 8 to 10 years of age. For the males it is slightly later – around 10 to 12 years. The overall structures of the pods is quite interesting, and some of them may have just males or just females in them. However, when it is time for mating the dynamics are going to start to change. What is also known is that they can mate with Bottlenose Dolphins to create hybrids in the wild as well as in captivity.

It takes from 10 to 12 months after mating for a calf to be born. The mating season and the time of year for birth vary by location of the Risso’s Dolphins. The young are well cared for by their mother until they are about 2 years of age. Her body produces milk for them to consume and when they are about 6 months old they will also start to eat squid and fish.

The estimated number of Risso’s Dolphins in the wild is 320,000 but that is hard to secure due to where they live. They are one of the few dolphin species that has this high of numbers so there isn’t as much conservation in place for them. They don’t get hunted as often for food and they seem to really do well when placed into captivity. However, risks such as pollution, noise, and lack of food can be problems to look at. Without interventions, their numbers could drop quickly in the future.