The smallest of all seals is the Ringed Seal. They are intelligent and they are able to live in cold regions where very few other animals can survive. They have a layer of fat that is called blubber. This helps to protect them the extreme cold elements that surround them. They can be up to 5 feet long when they are mature and weigh close to 150 pounds.

The body of the Ringed Seal is very large and it helps them to be able to store up fat. They will live off those reserves when it is hard for them to get enough food in the winter. They have dark gray on their backs and rings that create patterns and that is where their name comes from. Those rings are a lighter gray color. They have flippers with claws on the front ones.

The Ringed Seal is able to live in the cold Arctic and sub-Arctic regions of the world. They can live under thick layers of ice in the very cold water. They have to surface for air and they will find air pockets or openings in the ice to be able to do so. They use their paws to create air holes if they don’t find them readily offered.

They enjoy interacting with each other. In the water they are solitary but when they surface they will congregate on large pieces of ice. They will stay close to cracks and holes though so that if they need to quickly get into the water again they can. They also build lairs out of snow to protect them.

They can dive up to150 ftbelow the surface of the water to escape danger and to find food. They are often seen blowing bubbles as they get to the surface of the water. This is a way for them to check to see if Polar Bears are there and could be responding to their presence. If they don’t get signals of such a threat then they will likely go up for air. 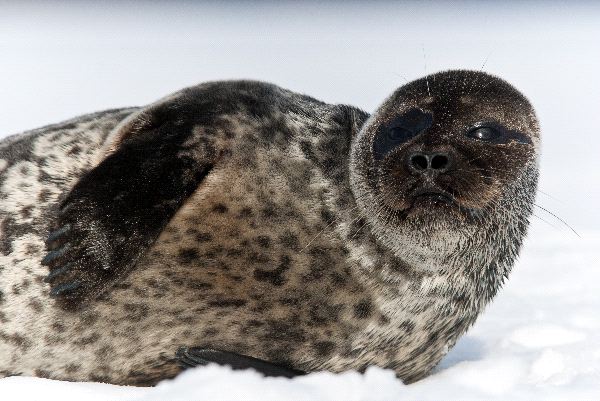 They are opportunistic feeders and will eat any time they can. They know that there will be times in the year when they can’t find enough. If they have extra fat stored up though they can get through those lulls until there is plenty of food for them again. Cod is the majority of their diet. They also consume various types of crustaceans.

The Ringed Seal is ready to mate when they are about 6 years old. After mating the female body will take part in delayed implantation. That means that the embryo won’t attach to the uterus and begin to grow for several months after mating has occurred. This allows the young to be born when the conditions are best in terms of weather and food supplies.

The gestation period is approximately 240 days and she will use a lair she has created to keep it safe. She will give the pup milk from her body for 2 months. She will live off fat reserves. After 2 months she will need to leave it alone to go get food. The young will be weaned and have to care for themselves. Under the right conditions the Ringed Seal can live in the wild for up to 40 years.

Global warming continues to be a threat to all animals living in the Arctic region and this includes the Ringed Seal. The loss of ice makes it hard for them to survive because they are losing their natural habitat. With less ice they are also more vulnerable to various predators that they share that habitat with.